For two teachers at Emerson Academy of Dayton, having their scholars match up as reading buddies has created such a positive feedback cycle for both grade levels. Every Friday morning Danita Fletcher’s eighth-grade homeroom class goes to Allie Dyer’s first-grade class to meet for 15 minutes of reading with a buddy.

Typically, the books combine with something Dyer is doing with her first-grade scholars.

“I was doing a fairy tale unit and I had these five-minute fairy tale books that the students could use,” Dyer said. “It’s nice to have the ability to incorporate what the kids are learning and the curriculum with something fun that they can do for 15 minutes.” 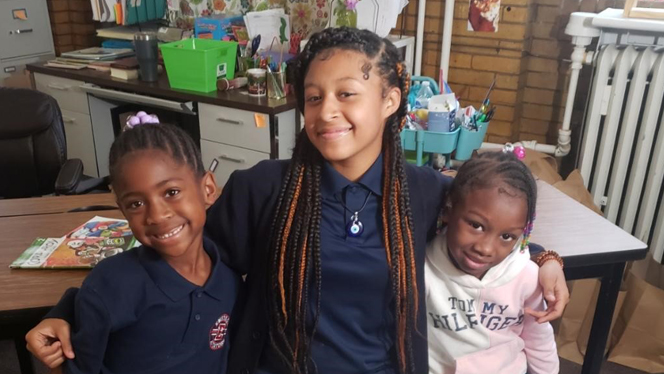 Eighth graders from Danita Fletcher’s class meet with first graders from Allie Dyer’s class every Friday morning.
Both teachers are on the building leadership team. At the first meeting in September, the group was talking about ways to increase attendance, especially on Fridays. One of the ideas added to the board was to have reading buddies between a higher grade level and a lower level.

“As we were walking out of the room, I said, ‘We should do this,’” Dyer said. “It’s an idea on the board, let’s run with it, and we did. I have seen how meaningful it is for both classroom groups.”

Dyer usually helps pick the books. Her most interesting experiment was bringing in past issues of Time and National Geographic magazines. Dyer and Fletcher have both seen the older kids explaining to the younger kids what magazines are because some of them have never had much exposure to them.

“For the eighth graders to read a story out of either of these magazines can be a bit of a stretch for them,” Dyer said. “It’s fun to see them use things that are in my room like, how to read a nonfiction text, what’s a text feature, or look at the photos and read the photo caption to help explain what’s happening.”

The two groups naturally broke into reading partners. They are evenly matched, 22 in Fletcher’s class and 24 in Dyer’s. Sometimes, the kids double up if needed.

The 15-minute reading session is a highlight in the students’ week.
“I see a definite sense of pride in my eighth-grade students,” Fletcher said. “A lot of those same students will not volunteer to read out loud in class, but they will read to their buddy. I see them gaining confidence, fluency, and becoming good role models, too.”

“I had four or five kids, who at the beginning of the year were struggling with their alphabet, and now they have become real bookworms,” Dyer said. “They saw what cool experiences they could have with their friends and peers. They view Mrs. Fletcher and her kids as being just the coolest thing since sliced bread! The students have seen reading as a way to learn and that is so cool.”

One of Fletcher’s home room students was asking her why she was excited by the Friday reading club because she’s a math teacher. 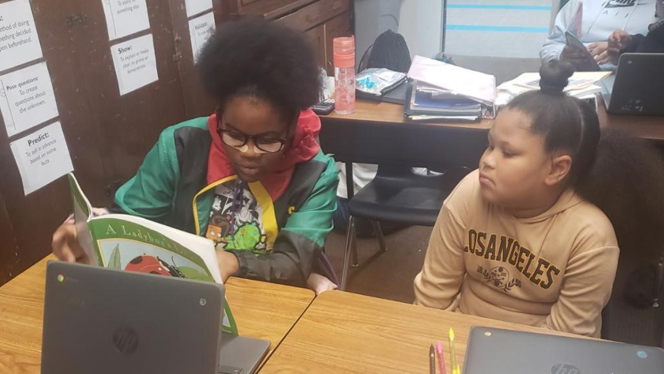 First-grade Teacher Allie Dyer typically has a box filled with books for the students to choose.

“I told them, they don’t see what I see,” Fletcher said. “The first graders have the brightest eyes when my kids come in. And then when they see each other in the hallways, you see that my students mean something to them. They are bringing them something every Friday and they appreciate it. It’s just so cool!”

Dyer and Fletcher decided that they would have a math story problem Friday soon, where the older students help the first graders read complicated math problems.

“As a math teacher, I stress how important it is to read well, too,” Fletcher said. “If you can’t read well, it’s hard to do story problems.”

Dyer finds it is all connected.

“To have access to math and science, we have to have literacy,” she said. “I was working with one of my students on a story problem who couldn’t picture what a sheep looks like. The problem was, you have one sheep and three chickens, how many legs do you have. If a student doesn’t know what a sheep is, then how do they answer that problem? We have to build their conceptual toolbox.” 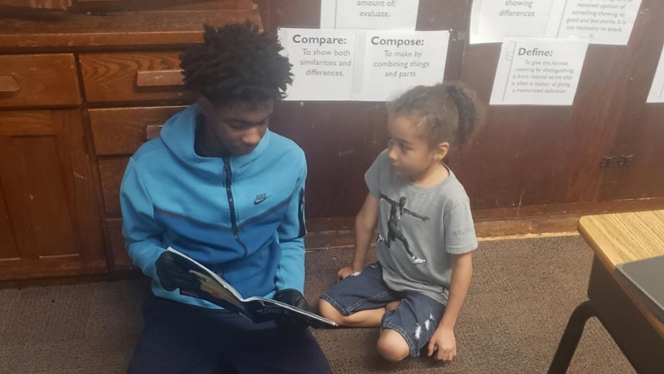 Students naturally self-matched with a buddy and have stayed with the same person.
Planning for the Friday morning reading buddies does not take much time for Dyer and Fletcher. Typically, it is a quick chat in the hallway. And the 15-minute morning timeframe after special classes is where both would usually teach about the monthly Moral Focus virtue. The teachers tie the reading buddies program into Moral Focus on that day.

Both teachers have heard positive comments from the eighth graders about them being interested in teaching now or that they have discovered that they like hanging out with younger kids.

Dyer has three reading level groups in her classroom; two of the groups will typically finish a book in the timeframe allowed. The highest reading level students will sometimes take a few sessions to finish their more advanced book. 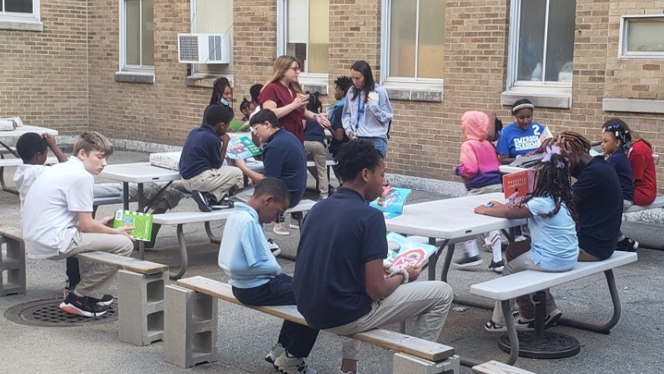 “Nobody wants to miss out on their time with their reading buddy, and that’s the icing on the cake,” Fletcher said.