How One School Leader Comes Alongside Teachers to Promote Efficacy

A desire to guide and inspire teachers to be better than they had ever dreamed of being is what catapults this school leader into her work. Meet Koree Woodward, who is just over five months into her new role as director of school quality (DSQ) at National Heritage Academies (NHA).

What brought her to the field of education was her love for school growing up. “I had teachers who saw my potential when I didn't and helped me to get to where I am today,” said Woodward. “Teachers help students to see themselves as more and inspire them to make connections, and I wanted to be part of that. Work is not just a job or a paycheck. Instead, it’s about being useful in the world and making a difference by helping others.”

After graduating from Central Michigan University (CMU) in 2003 with a Bachelor of Science in education, Woodward moved to West Michigan in search of a teaching job. She wasn’t sure what she was going to do until she met Dave Angerer, current executive director of schools at NHA, who at the time was the head of a Holland-area school.

When she first met Dave, he was dressed as though he had just strolled off a boat, in a Hawaiian shirt and all. He offered her the position, and she was thrilled. Woodward served under Dave’s leadership until 2008 when he left to lead Grand River Preparatory High School. A year later, an assistant principal position opened up at Grand River Prep, and Woodward got a call from Dave which resulted in her accepting that role at Grand River Prep.

Over the next few years, Woodward toggled between Wellspring Preparatory High School and Grand River Prep. Along the way, she received a Master of Science in administration from CMU, and Master of Arts in educational leadership from Grand Valley State University. 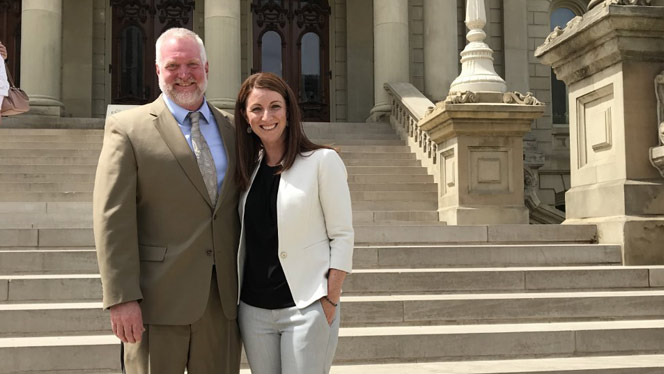 Fall of 2020, Angerer approached Woodward regarding the integration of PrepNet and NHA, and she instantaneously said, “Dave, I’m following you. I want to help where needed and appropriate with my skills and experience."

As a DSQ, her portfolio includes overseeing Grand River Prep and Wellspring Prep. Who better to support those schools than Woodward, someone who led both at a point in time?

As a leader, Woodward is committed to leading leaders. “It’s not helpful to tell people what to do,” she said. “It’s about finding new and creative ways to build on influential leadership skills, and not just telling or directing.”

In order to effectively lead, Woodward holds meaningful connections as a staple in her educator toolbelt. When she was teaching, she had students who would come and eat lunch with her. She experienced the impact of this when a previous student of hers shared the following with a friend, “I loved her. Please tell her she saved me in middle school by letting me eat in her classroom.”

Woodward does the same thing with staff. “I come alongside them and help them be better teachers than they ever dreamt of being. You can’t be in this industry and remain in the status quo. Status quo is a bummer. As an educator, you have to think outside the box and be innovative,” she said. 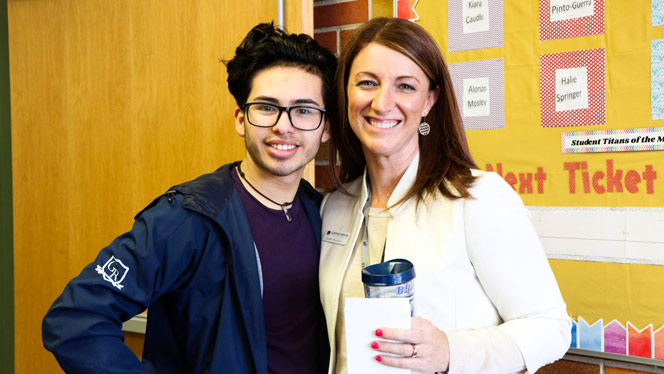 Her keywords for how she comes alongside and guides teachers are agency, efficacy, competency, and supported. “Everything I do as a leader I want to tie back to one or more of those keywords,” said Woodward. “Teachers are the most important variable impacting a student's success. Therefore, ensuring that our teachers are well prepared to make a positive impact is the most important work of a principal.”

Angerer explained that Woodward’s record with coming alongside teachers and administrators to develop and improve their instructional practice make her a perfect fit for her new role as a DSQ. “What stands out most to me about Koree's leadership journey is her work ethic and the humble approach she takes to driving her teams toward amazing student achievement results!” he said.

Her dedication to pouring into her staff and students has not gone unnoticed. Woodward was recognized as MAPSA’s 2019 Administrator of the Year and in 2014 was a recipient of Central Michigan University’s 10 Within 10, which recognizes young alumni who bring honor to CMU through work in their career or community.

When looking at her new role, Woodward is most excited to learn more about the K-8 space. “I am an expert at being behind the scenes and understanding the nuts and bolts. NHA has a ton of things that have been developed over the years, and I’m excited to dip into and learn about those things. I look forward to true partnerships and collaboration, and to give that to our families. We’re there so they don’t have to worry about their child’s educational career, and that there is a path to the end.”

When asked what the NHA difference is, Woodward immediately shared the desire to listen. “NHA takes feedback and acts on it and is always looking to improve. It’s a feeling of drive and wanting to hear different perspectives and opinions.”

Her best piece of advice is that when planning or making any decisions, always ask yourself and your team, "Is this ultimately what's best for students?" If the answer is anything but "yes", go back and find a better solution.
Previous Post: Breaking the Stigma of Children and Mental Illness During Mental Health Awareness Month
Next Post: NHA Employee Takes Life in Stride