Later in life, Large moved across the country from New York to join his brother who was teaching at a school in Florida. After sending his resume and traveling for an in-person interview, Ron was offered a role serving at an urban school in Orlando, teaching sixth grade.

Before landing his first official job in education, Large dabbled in substitute teaching at his old elementary school. Looking back, he shared that his first experience in the classroom was eye-opening. “I’ll never forget the first time I taught,” he reflected. “I knew right then that this is what I wanted to do. It was a motivator for me to pursue an elementary education degree.” And that’s what he went on to do, graduating from The State University of New York (SUNY) Cortland with a bachelor’s degree in elementary education. 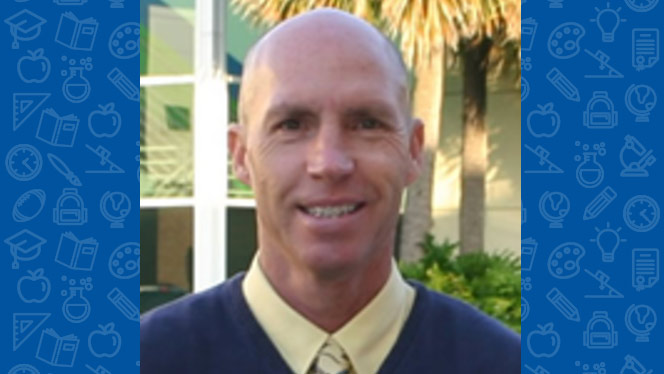 Advancing through his career, Large later received a master’s degree in educational leadership from Nova University and a doctorate of science in educational leadership from the University of Central Florida. Passing along his love for education, Large’s two daughters are now following in his footsteps, both teaching at charter schools, one in New York and the other in Colorado.

Since then, Large has built his experience beginning with teaching in the classroom, eventually moving into various principal positions within other districts and at NHA, and ultimately landing in his current role serving as DSQ at NHA. Prior to serving as a DSQ, Large began his journey at NHA by leading Southside Academy Charter School as executive principal.

“While at Southside he consistently got outstanding academic growth results,” said Michael Stack, senior director of school quality. “He facilitated academic ‘pep rallies’ that celebrated and recognized individual student achievement which created a sense of excitement for students. Students took ownership of their own learning. They wanted to be recognized at the next ‘pep rally’.”

Applying that pep rally mentality into his current role, Large shared one of his most memorable experiences working at NHA came at an event where school leaders from across New York gathered for a day of professional development. Aiming to get his leaders fired up for the upcoming school year, Ron incorporated his other life passion, music, to amp-up his New York colleagues.

With his guitar in hand, he asked his audience if anyone in attendance could sing. A teacher from Brooklyn Scholars Charter School stood up and joined him in performing “Let’s Get Together” by the Young Bloods. The audience rocked out to the duo’s performance, clapping along, and enjoying the show. “It was a good moment of connection and coming together,” said Large. “We don’t do enough of that kind of stuff.”

Large is well-versed in creating this sense of community within his schools as well. Applying his people-first leadership style drives a positive environment for all involved, including his students, staff, and school leaders. “Ron does an amazing job getting buy-in from staff and students,” said Stack. “His secret sauce is building a community of trust, respect, and genuine care for each other.”

In his years serving as DSQ, Large prides himself on building strong working relationships with his school leaders. He is driven by the philosophy that “if adults win, then our kids win.” A key goal that he continues to strive for is making the work he and his leaders do more human. “Education is not just a people business, the people are our business,” he said.

Tammy Pugh, executive principal at Southside Academy, is one of the many school leaders that Large has impacted by working closely with throughout his time at NHA. “Ron has taught me about focusing more on the emotional intelligence aspects of the people that I work with,” said Pugh. “He develops his people, including students, staff, and parents, by encouraging them to become more self-aware and motivating them to want to be better and perform stronger.”

Over the past few months, during the COVID-19 pandemic, schools across the country have made many adjustments, including how leaders run their schools, motivating staff to continue progressing onward. Large explained that, to him, the most important connection he can make is with his people. He has been intentionally checking in with his leaders simply to touch base to gain an understanding of how they are managing to navigate the pandemic on a personal level.

“We can’t minimize the importance of checking in on people,” shared Large. “You're not going to know how people feel unless you ask.” This understanding guides his leadership and support with each individual school leader and community.

“Ron brings his collaborative approach to his network of schools,” said Stack. “Because of his leadership, Team New York is set up well to get through this pandemic while providing great learning opportunities for students. We are lucky to have Ron on our team!”