For this director of school quality (DSQ), empowering teachers to excel and dismantling the stereotypes that surround urban education are the key ingredients that work together for a recipe for success.

Chanavia Patterson, DSQ, began her journey at National Heritage Academies (NHA) 17 years ago. The beginning of her career had an exceptional start. Her youngest brother was a student at Warrendale Charter Academy when she was pursuing her degree in secondary education, emphasis in English language arts, at Alabama A&M University. 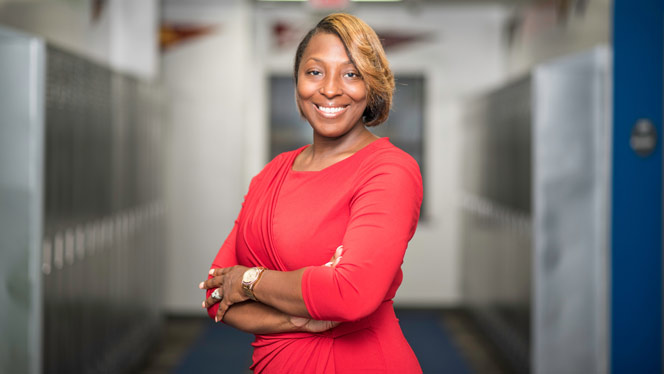 During school breaks, teachers at her brother’s school would invite her to their classroom to observe. Fast forward a few years. Patterson graduated from Alabama A&M on a Saturday, and by Monday had interviewed for a summer school position at Warrendale and got the job.

Over the following years, Patterson worked her way from teacher, to new teacher coach, to principal, to executive principal, and now she’s one year into her role as DSQ. Along the way, she received her master’s degree in educational leadership from Grand Canyon University as she knew administrative leadership was in her future. Very early in her teaching career, Patterson traded her teaching hat for a coaching hat after discovering a love of coaching other teachers.

“I would naturally reach out to teachers who may have been struggling and had a desire to help them,” she said.
Patterson takes a two-fold approach in her leadership. She is passionate about dispelling the stereotype that urban students cannot be proficient academically and coaching teachers to excel and become content masters.

Deconstructing the stereotype that kids who live in urban areas can't be proficient and excel in their academics plays a big role in what fuels her work.

In 2013 Patterson arrived at Detroit Enterprise Academy, where she encountered a school community that faced challenges and was ripe for change. Seven years later, DEA is now one of the highest-performing schools in not just Detroit, but in all of Michigan. Patterson’s resilience and passion for educational leadership didn’t go unnoticed. In 2017, she was named Michigan Association of Public School Academies “Administrator of the Year” as a result of her success at DEA.

“We rebuilt the school to be able to say, ‘Once you step into those doors, my kids are smarter than any kids you put up against them, regardless of anything they face outside of the school building,’” Patterson shared. “Dismantling the stereotype that it can't get done in the inner city is what gets me up and out of bed.”

When asked what it takes to dispel the myth of urban education, Patterson took a deep breath and explained it starts with building the confidence of students. She inspired a saying at DEA that they still live by and say every day at their morning assembly, “You go to the best school in the city of Detroit.”

Patterson emphasized that they had to pour in what they believed in order for the kids to produce it. As she continued to build their confidence up and pour into the teachers, deans, and students, they were able to stick their chest out and believe it and then produce what they were looking for.

Patterson truly believes that teachers who feel that they are constantly overlooked or overworked need a voice. “I feel that I am that voice for them. I’m there to remind them that they are a great teacher and that if educational leadership or instructional coaching is in their future and is something they want to do; they shouldn't be stuck in the classroom for 30 years if that's not within their heart to do.”

Patterson commits herself to helping teachers transition from classroom to coach. Her biggest advice for teachers who want to grow into school leaders or coaches is to position themselves to be an educational leader, which means they have to master their content. “You have to master everything from the classroom inside out in order to come out of the classroom,” she shared. “Trying to find that balance of what we really do and what it takes to be an effective leader is part of the coaching that needs to go into teachers so that they can make an informed decision as to whether they want to transition from classroom to coaching.”

Looking back at her first full year in her role as DSQ, a lesson that sticks out was the difficulty in the transition from the principal seat because she felt like she was giving away a child. “To be confident enough to say, ‘I've done well, they're going to be okay, and I still get to be here to support them.’ I had to let my baby go off and be great.”

It was a challenging transition for Patterson because she loved being the principal, but understood the bigger picture was that now she doesn’t just get to impact one school, she gets to impact five schools. She doesn’t get to impact 700 students; she gets to impact 3,500 students. “I had to keep the perspective in place to combat the feeling of letting go of the child that you raised to be great,” she explained. “I had to let the principal lead.”

Entering her second year in the role, Patterson is reflecting on what she will be taking with her moving forward and that is to always keep a mentor close by. A mentor to help keep her grounded in what she’s supposed to know and be comfortable not knowing at all.