Scholars and their families enjoyed participating in International Night at Lansing Charter Academy at the end of the school year. It was organized by English Learners Teacher Kelsey Erickson, and English Learners Paraprofessional Rebecca Krise.

“We have the event because a lot of our parents just aren’t aware of the different cultures that are present at the school,” Erickson said. “It’s nice to be able to celebrate all our cultures together.” 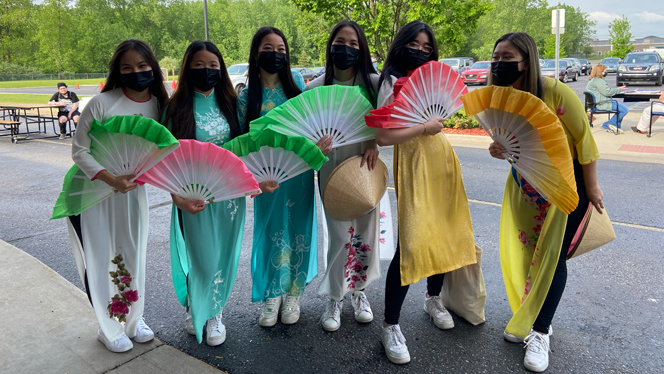 There were two performances put on by a group of young Vietnamese ladies who performed traditional Vietnamese dances.

Erickson who just completed her fourth year at Lansing Charter Academy said her largest number of English Learners are Spanish, Vietnamese, and Haitian. She has about 70 students she works with in small groups which is about 20% of the school’s student population. Some families wore their traditional dress to the celebration.

“At the event, I had a dad tell me they are Peruvian and if I needed a good Peruvian restaurant for next year to let him know,” Erickson said. “I didn’t even know that about his children. The event is just a fun way to learn more about and respect everybody’s cultures.”

This family is enjoying the food at the LCA International Night.

In past years, Erickson would have people volunteer to create a table with a food item representing a particular country. Due to COVID-19 restrictions, she needed to have food catered for the event. They worked with four local restaurants to plan their menu.

One table had hummus with pita bread, made with chickpeas and garlic, and tabbouleh, a parsley salad, both of Middle Eastern origin. Another table had Asian vegetable egg rolls, and another table served Eastern and Central Europe pierogies, a dumpling with a savory filling. The last table had Mexican chicken tacos. At each food table there was a map of the world and where that particular food item originated. 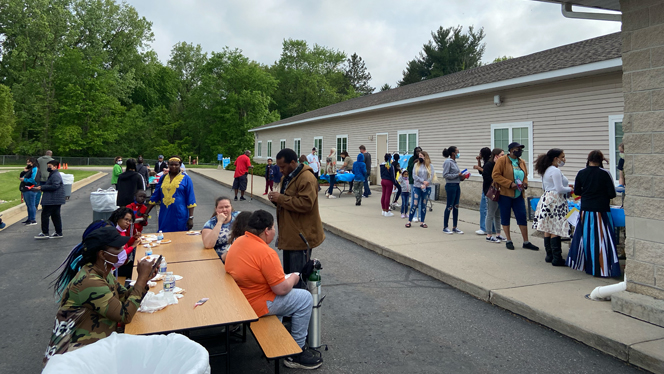 Erickson and Krise also created an encouragement table to draw attention to the Ukrainian conflict. They drew the Ukrainian flag on a large poster then put it on a white board. Guests wrote words of encouragement on Post-It Notes to leave on the poster.

They also included an art table with beautifully decorated Ukrainian Easter eggs called pysanky. Guests could take different designed sheets to color in and create their own art. Some legends say that putting an egg at each of the four corners of a house brings good luck.

There were two performances put on by a group of Vietnamese young ladies who performed traditional Vietnamese dances. One of the performers was a former student who has a sister and cousins still attending Lansing Charter Academy.

The organizers had giveaway items, as well. “We had 12 books, each describing a different country,” Erickson said. “Students were able to take as many of the books as they wanted. I was thrilled that we could give something like that away.”