|  January 14, 2022
Jessica Kennedy isn’t the type of person who looks for praise or thinks of herself as award-winning, but she’s exactly the type of teacher who should receive those accolades. In late 2021 Kennedy was presented with an Educator of Excellence award by the North Carolina Department of Public Instruction for her work as a Special Education teacher at Forsyth Academy.

“I don’t like recognition like that, but these kids at school are my world,” Kennedy said. “There’s almost no separation between my children at home and these kids, as far as the things I would do.”

If a parent’s car breaks down and a student needs a ride to school, she leaves a note on her dashboard as a reminder to pick them up in the morning. If a student doesn’t have a bookbag, she’ll make it happen from what she has at home. Her kids tease her about it constantly.

“My own children actually make fun of me, they’ll say ‘oh if it’s for your students, you’ll say yes,’” Kennedy said. “Or maybe they’ve out-grown something or they don’t need it, I’m like ‘I’ve got a little girl at school who loves cats and will do anything for a cat-anything and you don’t need it,’ so they just tease me about it.”

That dedication is well-known by the entire staff at Forsyth Academy.

“Her instruction itself is really intentional and she works really hard to meet the individual needs of that scholar,” Overman said. “Her culture is amazing. She has really tight routines and procedures, so the (challenging) behaviors that happen in her classroom are really minimal.”

Kennedy’s journey to special education seems a bit magnetic. Two of her own children have special needs, so she found herself quick to identify children in her classroom that were having challenges. Other teachers picked up on her abilities, as well, and would often send some of their students to her for interaction. After nine years in a traditional classroom, Kennedy felt drawn to make a change.

Although she was already certified to teach K-8, Kennedy needed to take the additional testing and recertify so she could teach K-2 special education.

“I really think it’s her niche,” Overman said. “She approaches students with such warmth and care. They know they’ll be loved and taken care of in her classroom.”

What also comes naturally is her dedication to communication. Kennedy said all her students’ parents have her cell number and are encouraged to text her if their child is having successes or challenges she should know about.

“I am open to texting at any time of day,” Kennedy said. “If your kid is having a hard morning, text me and I’ll be ready to help with that transition. All my parents, we text weekly, if not daily. I do hospital visits and home visits. Whatever they need, I don’t mind doing. The thing I find most important is that parent-teacher relationship.”

Kennedy talks about a technique called sandwiching, where she uses compliments like the outer pieces of bread with an opportunity to grow as the meat in the middle. She knows parents don’t just want negative information, so she’ll send them a fun picture of their student or a video of them in music class. So, when she needs to have that hard conversation, she’s already built up the positives.

“I do that because I want the same for my kids,” Kennedy said. “There’s nothing more frustrating than a special ed teacher that doesn’t understand your child, that’s not ‘on it.’ If everything in life is falling apart, you should be able to go to that one special teacher. I use those types of experiences to guide my actions, like ‘what do I want in a special education teacher for my child?’”

For Kennedy’s dean, there’s no question who fills that role.

“If I had kids, I would absolutely want them in her class,” Overman said. 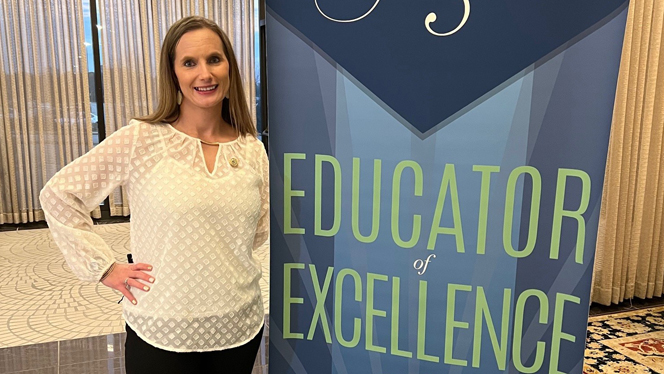