|  January 20, 2023
In helping students grasp the English language, Alyssa Claucherty has given them an educational building block that will help them conversationally and academically.

Claucherty, who is in her third year as an English Learner teacher for first and second graders, is part of a staff that earned Vista Charter Academy the title of a “Building the Hope” school that can provide strategies to be leveraged for educational recovery. Vista made the list because its English learners demonstrated growth above the state average in English and math for three consecutive years.

Claucherty said some students come to Vista speaking no English and are qualified as newcomers. Most come in knowing social English in some capacity but are lacking in academic English. The support she and fellow EL teacher Emily Zamudio provide has helped some Vista students test out at a high enough level where they don’t need to keep taking the same English language test every year to prove their proficiency.

“I work with the kids in many different settings, and I love when I see my students confidently using English in a way they had struggled with before, for example talking with a friend or comprehending a story,” said Claucherty, who first taught English to Hungarian students in Budapest before coming to Vista.
In providing support in a specialized setting, teachers “push in” by working with students in the general classroom, or “pull out” a small group of students to work in a separate location. While “pulling out,” students go over sentence stems exercises in which a phrase or word is missing. 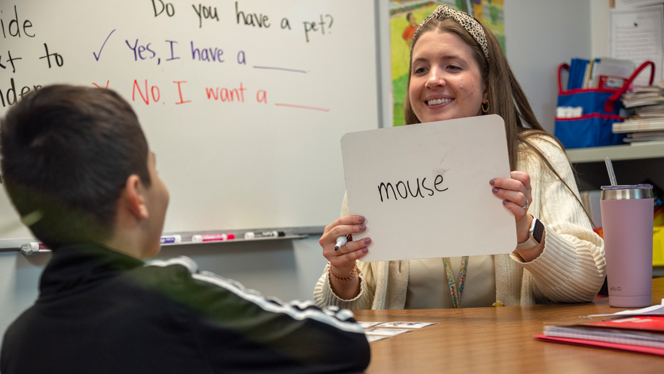 Alyssa Claucherty is in her seventh year teaching at Vista, and has been an EL teacher for three years.

“We’ll work connecting to the classroom curriculum, but we'll have more in an intense small group session where we can add in all those language supports, too, so that they’re still getting the same curriculum, but they have those supports needed to be able to comprehend and understand it. And then also use speaking and writing along with it, too,” she said.

Small-group instruction helps bridge the gap in academic language for some long-term EL students, which includes those who have lived in the U.S. their entire lives but grew up with parents who spoke Spanish, or those who learned English from a sibling. Those students usually are able to hold conversations but need more support with reading and writing.

“There’s a big cultural gap that we have to try to bridge with them coming from a different country,” Claucherty said. “They’re often able to learn social English pretty quickly from their peers, especially if they’re younger. They pick it up really quickly, but the academic language is usually what takes a lot longer to for them to develop.

“The first couple days, they’re not really sure, they’re kind of following my lead. But after a couple of days it starts to click and they are able to answer deeper questions about this topic or they’re able to apply it to different parts of their lives. That’s been really exciting.” 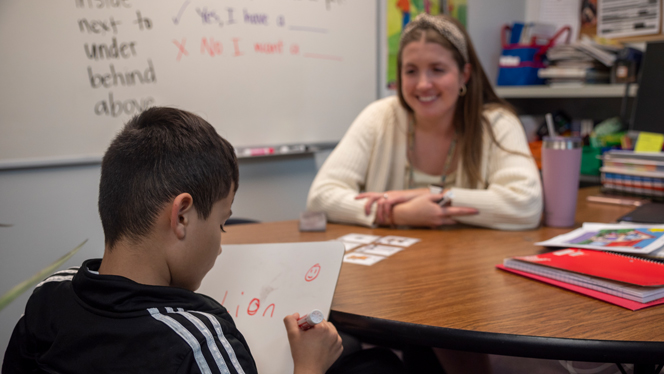 Vista was named as a “Building the Hope” school in part because its English learners demonstrated growth above the state average in English and math for three consecutive years.

Vista Charter Academy outperformed the local district, Grand Rapids Public Schools, the past 13 years with a curriculum built on a character-based approach to learning through Moral Focus virtues that develop the whole child. With children in post-pandemic learning, Claucherty has had to backtrack to make sure their English skills are where they were three years ago. Some kids missed half of their kindergarten year or their whole first grade year, and some newcomers weren’t exposed to English for months.

“Coming back, we've seen growth over the past couple years, but there's been bigger achievement gaps than there were before just because of all the learning loss,” she said. “We're working through it and each year we kind of bridge the gap a little bit more.”

In taking ownership for the success of their students with their detailed approach, Claucherty and the Vista staff have ensured the school is the best choice for parents and students.

“The staff is really supportive of each other. People come together to help out whenever it is needed, no questions asked,” she said. “I love that. The real reason I love my staff and I love the school is because of the kids, because of the relationships I’ve been able to build.”