Then and Now: A Series of Events that Built This Resilient NHA School Leader

Personal experiences are shown to be effective building blocks for an exceptional leader. Shawn Leonard, senior director of school quality at National Heritage Academies (NHA), lived through the challenges that many Detroit students face. It was these experiences that led to his success in the field of education.

His story takes a trip down memory lane to tell how he got from there and then, to here and now.

Throughout his childhood growing up in Detroit, Leonard faced issues of poverty, homelessness, and violence. He recounts a specific hardship he faced during his senior year of high school.

“I remember this vividly,” explained Leonard. “When Northwood University offered me a sports scholarship, I was actually sleeping on my sister's one-bedroom apartment floor. I was sleeping there after spending several nights sleeping in a car my father borrowed from a friend. At the time, my father had lost his job and the house we were living in did not have electricity. I was using my sister’s apartment as a place to sleep with heat and electricity. It was a challenging time as a senior, and when Northwood offered me a full scholarship, I jumped at the opportunity.”

Leonard graduated from Northwood with a dual major in marketing and management. Starting his career in business, Leonard was working as a recruiter when he began to feel disengaged in his work. After getting breakfast with his supervisor, a nearby woman expressed that Leonard would be an ideal person to come speak at career day at her daughter’s school.

How could he say no? While visiting with a fifth-grade class for career day, he walked away from that experience feeling a strong connection to the kids. Later that night, Leonard had an epiphany moment…he decided that he wanted to go back to school and pursue becoming a teacher. 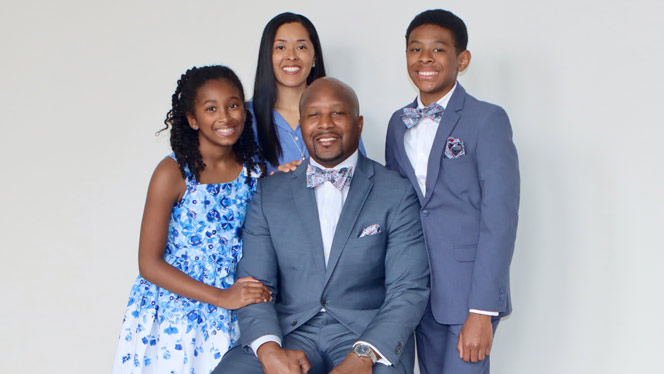 Leonard enrolled at the University of Phoenix and obtained the first of two Master of Arts degrees in education and kicked off his teaching career at YMCA Academy in Detroit. What made Leonard a perfect fit to educate students in the Detroit area was that he could relate to what they were going through and where they were coming from because he lived it himself. The school was two miles away from one of the many neighborhoods Leonard spent his childhood. In fact, the school was a few miles away from his high school alma mater, Redford High School.

After spending four years teaching, Leonard was promoted to assistant principal for the remainder of his time at the YMCA Academy. That launched his leadership career. So, how did he find NHA?
After helping other schools and students, and with the experience serving in various education positions, Leonard reached out to NHA, a connection he had made years prior at a recruitment training event That second encounter led to a principal in residence position at Achieve Charter Academy. He partnered with Claudia Williamson, founding principal, and spent a year building that school. From there, Leonard transitioned to principal at Hamtramck Academy and then to founding principal at East Arbor Charter Academy.

Today, Leonard is in his sixth year serving on the School Quality team at NHA. He was recently promoted to senior director of school quality, overseeing schools and leaders across Michigan, Colorado, and Georgia.

Leonard supports and believes in the missions and values of NHA, so much so that his two children are NHA students. “We have 60,000 Jaiden’s and Samara’s that we are serving,” shared Leonard. “It’s my job to make sure that the decisions we make are going to help all of them.”

While his bucket filler has shifted, the students are the “why” behind the work he does. “Right now, my bucket filler is helping leaders be better,” said Leonard. “My proudest moment as a DSQ is the leaders and the school leadership development team that I've had the opportunity to work with.”
Being goal-oriented, Leonard had to intentionally work and develop the skill of expressing his authentic care for others. “I’ve had to find a balance between achieving goals and remembering that the relationships are what’s important and why we’re all here,” he shared. “Now I’m able to connect on a deeper level with the school leaders I work with.” 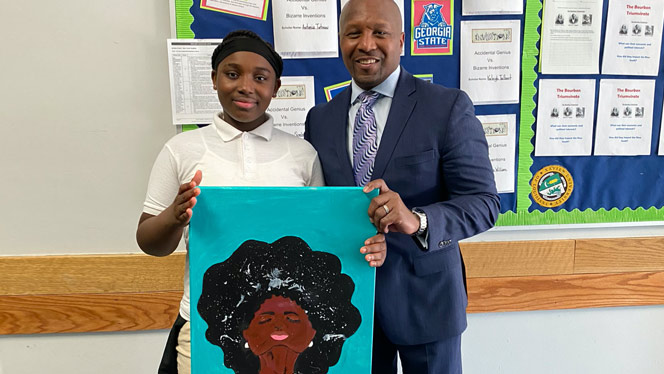 For example, his buddy, Justin, from Atlanta Heights Charter School. Justin is now in ninth grade, but whenever Leonard would visit Atlanta Heights, Justin would seek Leonard out to make sure that he knew what was going on with him. Relationships are vital.

Leonard integrates his management expertise into his work as a leader at NHA. “I like having a goal and working to reach that goal. Intentional evidence-based action planning, data and trend analysis, and determining what we need to do next to help improve teaching and learning are all things that I do really well,” said Leonard. In his role as senior DSQ, he’s in the position to support, advocate, develop strategies, and work to ensure NHA teachers continue to receive everything they need to serve kids.

“Our teachers really matter, and so do our principals,” explained Leonard. “The COVID-19 pandemic has helped bring that to light in our society, beyond NHA. They are true difference makers. On the flip side, what I bring to the table that will help is the ability to listen and advocate for our schools and NHA.”

His support has not gone unnoticed. Leonard's team took time out of their day to express their appreciation for his support throughout the COVID-19 pandemic with a heartfelt thank you video.

Stay tuned on Dec. 16 for the next installment of our DSQ blog series when we introduce you to Ron Large, a school leader who support NHA schools in New York.
Previous Post: Michigan Second Grade Charter School Student Publishes Children's Book Reflecting on Experience Learning Amid COVID-19
Next Post: National Heritage Academies Named One of the Nation’s Best and Brightest Companies to Work For®