|  June 17, 2022
By finding a balance of seriousness and silliness, Vedi Ramdhanie has forged a connection with students that lasts well beyond their time in her classroom.

Ramdhanie, a third-grade teacher at Riverton Street Charter School, has found that weaving in her love of animals with teachings of compassion into her lessons is something scholars remember fondly. In learning through analogies, her students get to know her cats quite well.

“I’ll do silly things with them but then they know when it’s time for instruction, they’re very serious about it and I have really high expectations for them,” she said. “I have four cats, so I impart stories about my cats in almost everything in ELA and infuse it in their math. They ask me, ‘How is Oreo this weekend? Was there any cause and effect happening with Oreo?’ It’s just little things like that. That makes learning relatable for them.”

Students in Vedi's class take part in a butterfly release after they completed a science unit on animal life cycles.
Ramdhanie was recognized as a winner of the 2020-21 NHA Excellence Awards. Her rapport with scholars was evidenced by one former student who now is in middle school and shared what it was like to be in Ramdhanie’s classroom after so many years.

“She spoke nicely at the ceremony that they had for me,” Ramdhanie said. “She had a whole writeup up about me and she went around and asked other students to say something nice and they put together a letter for me. It was really touching.”

Ramdhanie is in her eighth year at Riverton, making some of her former students soon to be college-bound. As an example of her investment in their learning, she remembers an exercise that involved giving scholars images from different parts of a wordless book of pictures, “Flotsam” by David Wiesner, and having them write a story. One scholar whom she stays connected with and visits the classroom periodically wrote an especially memorable short story that Ramdhanie took pride in facilitating.

“His story was amazing, he’s just such an amazing writer,” she said. “I’m hoping that he becomes a future journalist or something, he was awesome.” 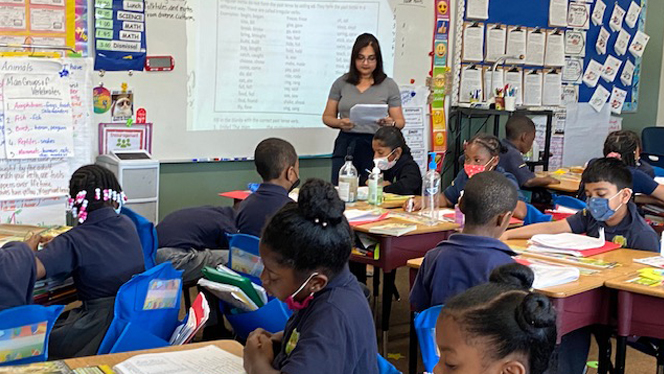 Scholars participate in a novel study lesson on "Because of Winn-Dixie".
Ramdhanie said she was surprised to be honored as an Excellence Awards winner. Having her family and students be part of the big reveal was an emotional moment, not because it validated her work, but because it epitomized the kinship she has created.

“The way they organized it here at Riverton was amazing,” she said. “They’re really, really sneaky about it. I saw the flowers on the table. I said, ‘We’re all gonna be appreciated with flowers,’ but then the principal started introducing the other teachers, and then she chose me last. When she got to me, she had a whole story written up, and I was like, ‘Wait a minute, there’s something strange happening here,’ and then she introduced me. She told me I won, and it took me a while to register it.” 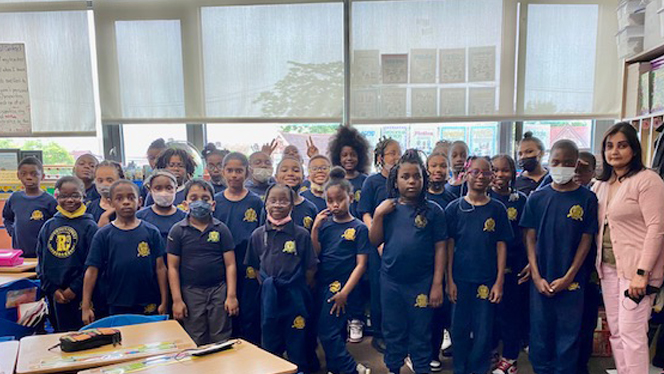 Vedi Ramhanie is her eighth year teaching at Riveron and was recently a winner of the NHA Excellence Awards.