Michelle Bemis had no way of knowing her need to escape the summer heat would help her take the stage as a contestant on popular quiz show “Jeopardy!”.

Bemis, a social studies teacher at Taylor Preparatory High School in Taylor, Michigan, began her thirst for knowledge at a young age.

“I've just always been a really big reader, way back to when I was little,” Bemis said. “I grew up in a house that didn't have air conditioning and I would complain, ‘oh, it's so hot,’ and my mom would say, ‘well then go ride your bike to the library.’”

Her summer afternoons would be spent hovering over a good book with air conditioning keeping her cool and barely a thought of the chores awaiting her at home.

‘I’ve always, always been a reader,” Bemis said. “So, when students say, ‘Oh, I'm not reading anything’ or ‘I don't like to read,’ I can't wrap my mind around that.”

That constant knowledge gathering served her well as she worked her way through the challenging journey to “Jeopardy!”. It’s a long process that, for Bemis, began with a failed attempt in 2001. She decided to try the online test in 2021. Another online test followed, along with interviews with show producers, an online practice game with other hopeful contestants and finally, a text from the show: She made the cut.

“It was wonderful, it was so much fun,” Bemis said. “I competed against two gentlemen; they were both in academia. One is a professor, and the other has been homeschooling his niece so her parents wouldn't have to quit their jobs when her school went remote.” 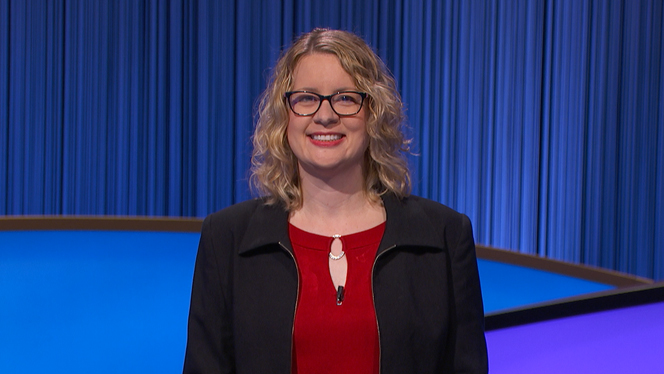 Bemis finished in second place on the episode that aired Feb. 9 and said she only has one regret: not betting enough on a Daily Double she answered correctly.

“In retrospect I definitely should have wagered more but it's very easy when the game's over (to know the right moves). I was about $4,000 down going into the final, so I would have needed to wager more on that Daily Double and the final.”

She and the eventual winner both got the Final Jeopardy question correct: Where was the first YouTube video recorded? (San Diego).

Bemis got 20 correct answers, four more than the winner, Lawrence Long, and two incorrect during her appearance.

She said staff and students at Taylor Prep were very encouraging throughout the process.

“Everyone was wonderful, they were all super supportive,” Bemis said. “I watched it at my mom's house and Principal Danielle Carlson, she was texting me the whole time. Almost like live texting as the show's going on.”

Contestants who appear on the show generally only get one opportunity, but Bemis has a little hope to compete again in a recently announced second chance tournament. She’s one of 400  who could be selected.