Teachers at Southside Academy Charter School decided to try something different to help their scholars prepare for their English Language Arts (ELA) interim testing which took place in early November. They held an after-school review session based on grade levels for third- through eighth-grade students. About 75 students attended the event.

“Our goal was to make the event fun while incorporating a review session,” said Fifth-Grade Math Teacher Lindsay Watson, who also was one of the event organizers. “The students had pizza and snacks and even took home a goodie bag to reward them for their participation. This was a great event to boost student morale and pump them up before a big test. It was our way to beat the test blues and nerves!” 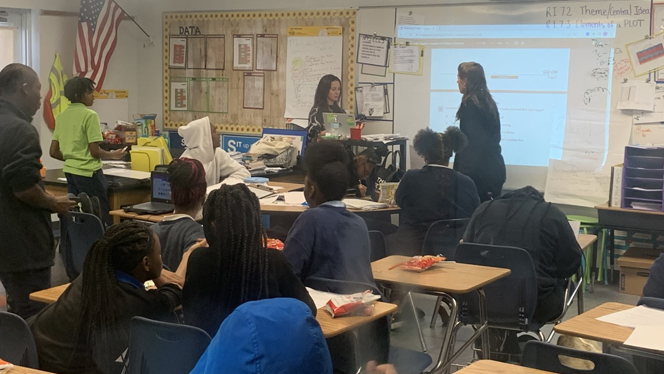 Watson explained how the School Improvement Team and Scholar Life Committee, chaired by Fifth-Grade ELA Teacher Rachel Bickford, wanted to focus on how they could help their students improve their test scores. Also, they knew scholars were a little more anxious because they would be switching to taking the test by computer as opposed to paper and pencil.

“Taking the interim tests are like a stepping-stone to prepare students for the final state test in the spring,” Bickford said. “The interim results help the teachers know where the students need to work more and what concepts they are understanding.” 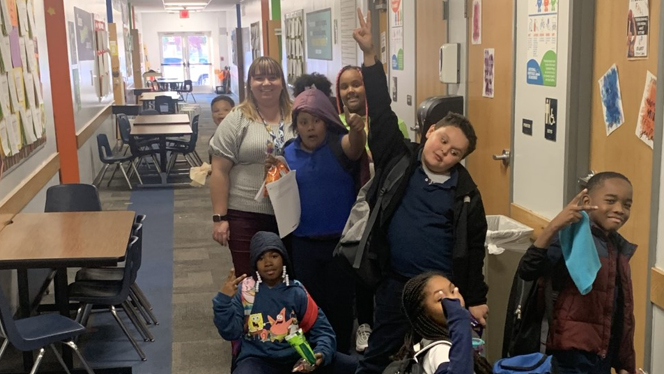 These students are getting ready to do their interim review session with Fourth-Grade Teacher Natalie Woodworth.

The Southside scholars were preparing for the ELA interim, then later in the month math interim testing is taken. This is typically done again in January, and sometimes there is a third set of interim testing. Fifth- and eighth-grade students also will do science interim testing.

“These interim tests help the students build longevity, and the ability to focus for a long period of time,” Bickford said. “I believe there are about 40 different standards that are addressed in the assessment. The interim test results give us a lot of immediate, usable feedback.

“For the Beat the Test event, four teachers took the different grade levels (seventh and eighth grade were combined) and they tutored them as a group. The students worked independently in the classroom, too. It was like a mock assessment, just so they could get their minds ready and prepared for the real test two days later.”

K-8 Grade Art Teacher Nancy Rynkiewicz had her students create positive, motivational posters to place around school to encourage the scholars to do their best on these interim assessments.

About 15 Southside staff were involved with the event. Organizers had the review session first, then dinner in the gym with pizza. The pizza delivery was running late, so they just kept working.

“No one seemed to mind that we kept working. Everyone was real motivated,” Watson said. “We also will work in art, performances, and motivational speeches. Our art teacher Nancy Rynkiewicz worked with some of her students to create motivational posters and they placed them around school and in the gym. In the future, we might have some of the older students come talk to the younger students about being persistent and to keep working hard. Maybe they’ll share their studying or test taking tips.”

With future events, Watson and Bickford would like to see students read poetry or a story they’ve written. Other students enjoy dance and step, and having a group of students do a dance performance is a possibility.

“My ultimate vision is to do a pep rally for testing,” Watson said.

Despite her absence, Watson wanted to be sure to give her co-organizer Bickford and the other staff her appreciation and credit for a job well done.

“The night before the event, I wasn’t feeling very good and that morning, I woke up really not feeling good,” Watson said. “But I was going to try to power through, I made it to 10 a.m. before I realized I wasn’t going to make it. I was so sad, but Ms. Bickford jumped right in and so did all the other helpers, and they did a great job. They were just fine.” 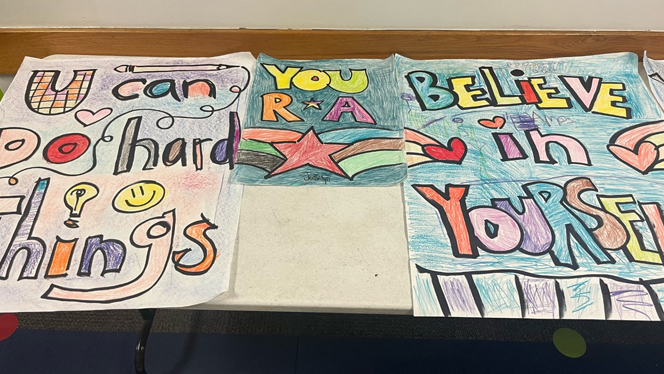 Watson and Bickford are encouraged by the initial results they see. Interim testing took place Nov. 9 and 10. They and their co-workers have had the opportunity to review and analyze the interim data with their grade levels and wings, and even though there was only this first study session, they feel they are seeing results and are eager to see what happens after the next event and testing session.

“This is a great event to boost student morale and pump them up before a big test,” said Bickford.