An unlikely duo – an art teacher and a kindergarten teacher – step in to coach the Metro Charter Academy's Robotics Team, Blazin Bots #15719. The two women have forged a wonderful friendship in the process. 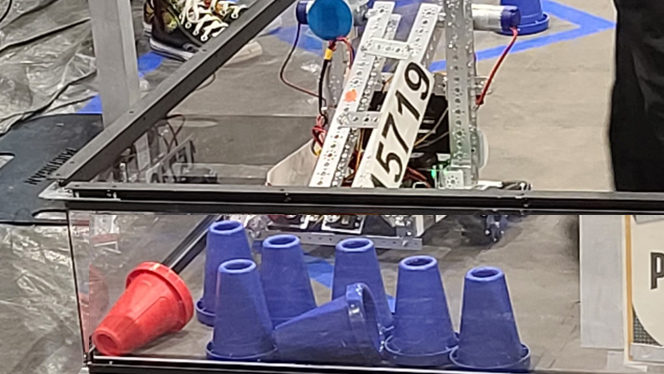 “The FIRST group is a global organization that requires the team to have two coaches,” Smith-Elliott said. “It’s nice to have two consistent adults working with this group of students. We depend on each other quite a bit.”

Metro's Blazin Bots #15719 competed in a FIRST Tech Challenge (FTC) regional qualifier in early December. It was a long 12-hour day for the group’s 20 scholars.

For Wojtkowski, or Coach W, it is her second year coaching. Smith-Elliott has been a coach since 2015 and involved with Metro since its opening in 2000 due to her three sons attending the school.

“When I got involved, there were these robotics kits that were sitting in storage because the previous coach had left,” Smith-Elliott said. “I was a teacher here by then, and another teacher and me thought we should re-start the club since we had a lot of the materials and tools, so we did, and here I am in my eighth year!”

FIRST in Michigan operates a progression of programs which differs from FIRST national. This model enables students to build upon the skills and experiences attained at one level then flow naturally to the next level without overlap. In Michigan, FIRST Tech Challenge is the sole program for middle school students. 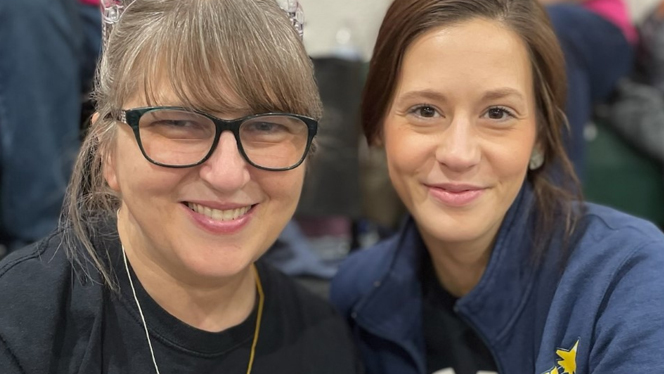 Metro’s middle school team members had been working on their robot since September and competed in five league meets leading up to the regional competition in early December.

“We completed building our new robot just before the competition and competed with it instead of our old robot,” said Smith-Elliott. “It was a little tense and nerve-wracking because the students were having a few complications with the new robot and getting it to work properly.

“It was necessary to do because our old robot had a lot of issues. This is a student-led group, and they made the decision to go ahead with the new robot in mid-November for the Dec. 3 competition. There was a lot of intense work done to get prepared in time.”

The Blazin Bots won two of the five matches and placed 28th out of 38 teams. At the competition, the other teams awarded the Blazin Bots for having the best attitude and the best giveaway/promotional items at the event.

“We are very proud of the team and all the hard work and commitment the students put into our team meetings this season,” Coach W said. “The team did great in their interview and impressed the judges during their judging session.

“We have faced many robot building, electrical, and programming challenges but together we persevered and met the challenges head on. We are very proud of our progress and are looking forward to competing again in May 2023.”

The coaches said being involved with the Blazin Bots team is a commitment for students and families. Typically, there is a meeting once a week after school and then a few hours on Saturdays. Leading up to a competition, there can be a need for more frequent meetings or meetings where particular kinds of students, such as the robot builders, programing, or coding students are needed. 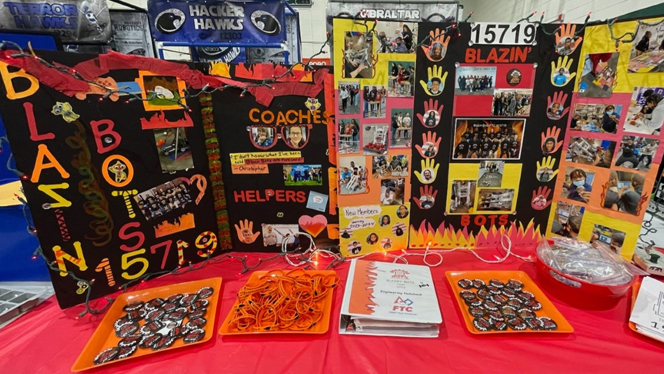 “We would like to thank the team’s parents for their support with fundraising and for providing food for our students at competitions,” Coach W said. “Special thanks to our additional coaches and parents, Coach Griffin and Coach Doug, for all of their time and assistance with robot building and modifications! We really wouldn’t be able to do it without our parents.”

Building the robots and having the needed tools is expensive. There are several grants teams can apply to with the FIRST organization, Michigan Department of Education or with local sponsors.

The coaches had an end of year pizza party and went around the room. Each scholar shared what they were thankful for in their life or with the team.

“So many said, I’m thankful I’ve learned about programming, or I got to drive the robot, or I’ve learned something different, or I’m thankful for the friends that I’ve made,” Smith-Elliott said. “Because our group spans fifth through eighth grade, the friends that have been made are special. They’ve really grown relationships as friends and created a sense of belonging. That sense of identity is as important as learning programming or how to use tools properly. They’re developing emotionally, and they are learning that kids in other grades are cool. It’s like a big family.”

What Takes Place at a Robotics Competition
Every year, a new competition game is created; this year’s is called Power Play. Each school can have four people compete in a match: two driver/operators, one human player, one coach and one robot. Four teams are randomly selected and two are put together to create an alliance. A team may be a part of your alliance one match and an opponent another time.

Robots must be built from materials specified in the manual and fit in an 18-inch sizing box but may expand larger after the match begins. The robot could become taller and most have a movable arm that will be able to grasp a cone. 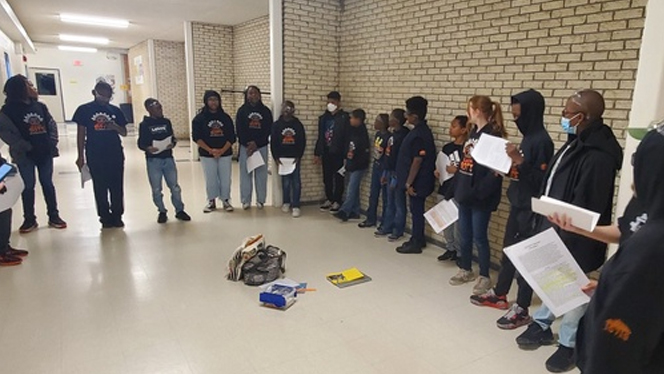 The game element is a plastic cone, 30 red and 30 blue cones. The game is played on a 12-foot square playing field. Points are accumulated by placing these cones in particular locations. There are junctions at ground, low, medium, and high heights that give teams progressively higher points. There are a variety of other ways teams can earn points. Each match is two minutes, 30 seconds.

Under strict rules, limited time and resources, teams of students are challenged to raise funds, design a team “brand,” hone teamwork skills, build, and program industrial-size robots to play a difficult field game against like-minded competitors. It's as close to real-world engineering as a student can get.