Last spring, a kindergarten class at Brooklyn Scholars Charter School was given a special assignment by Instructional Paraprofessional Angelica Gonzalez: write a letter to an inspirational leader. The class chose Vice President of the United States of America Kamala Harris.

“Each student wrote their own letter. The students wanted to let Vice President Harris know that we were studying her life and political career in our class. They also wanted Vice President Harris to know that she is an inspiration for overcoming the obstacles she endured throughout her life,” Gonzalez said. “We especially wanted to highlight the core values in which she demonstrated that we learn and infuse daily, such as inclusion, courage, and perseverance.”

Gonzalez said the excitement around Vice President Harris led to some conversations. Many of the girls commented that they wished they were just like her. The letters from the students were also being written to address some items in the community of east New York City, Brooklyn. “The students were seeking support to help the community, our parks, neighborhoods, and increase safety.

“While brainstorming, one of the students, Liam Persuad, raised his hand to say, ‘Ms. Gonzalez, we are writing these letters to Vice President Harris, but she doesn't know it. It's like writing to no one.’”

That is when Gonzalez realized, she needed to send these letters by mail to Vice President Harris at the White House, and she told the students that.

“The whole class applauded with great excitement, and they began to work harder on their letters,” Gonzalez said. “I can't forget the smiles on their faces, those smiles, for me, meant hope and faith.”

The letters were mailed in May 2021, and a reply was received in December. The Office of Presidential Correspondence is one of the largest and oldest offices in the White House.

“When I received the response from Vice President Harris, I felt an inexplicable happiness; I quickly shared it with Principal Roxanne Thomas, my colleagues and especially with my beautiful scholars,” said Gonzalez. “My scholars were very happy, as well as their families. Personally, it was a beautiful experience.”

Thank you for taking the time to write me, and for your kind words. It makes my day to hear from young leaders like you.

I promise to work hard for you each and every day. And I need you to be as kind as you are courageous, and as ambitious as you are curious.

You are our Nation’s future. 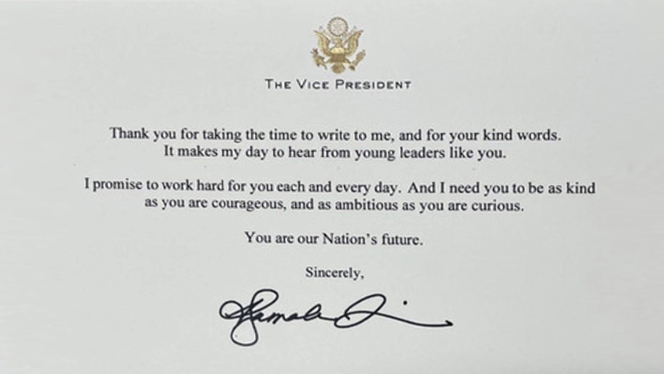