Brooklyn Scholars Gets Creative for March is Reading Month Activities

Thousands of children across the country participated in March is Reading Month and with nearly 100 schools in our network, National Heritage Academies offered some of the most creative options for students. Children dressed up as their favorite book characters, read by flashlight (or sunlight if in southern states), hosted guest readers, decorated doorways like their favorite books, and participated in Drop Everything And Read (DEAR) activities.

Establishing a strong reading foundation is a key component NHA teachers use with their classes. They work to create important building blocks to help students experience the joys of reading. It plays an integral role in shaping students in their school life as well as at home. 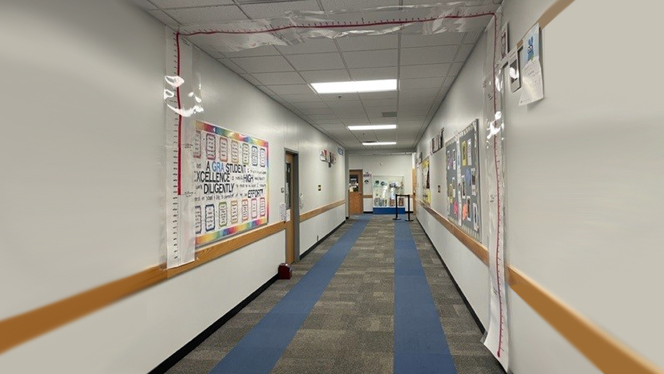 School organizer and Academic Specialist Nancy Green partnered with an organization called Read-A-Thon which logs the minutes each student reads and serves as the school’s donation platform for family and friends.

“I know the research shows, reading is the root of all,” she said. “If you can be a successful reader, you have got the world in your hands.”

The funds raised will be distributed by a school committee to be used for books, bringing in special programs, and helping to support classroom field trips.

Green, who is involved with intervention services at the school, explained that when she was growing up, nobody ever really introduced her to reading.

“It wasn’t until I was working on my undergrad (degree). I had two dynamic female professors that just opened my eyes,” she said. “I made it my quest right from the start of my teaching career to really work with kids and build a reading program like no other.”

A summary of the other March is Reading Month activities at NHA Schools is listed here. Be sure to check out the fun activities our school staff organized for our scholars. 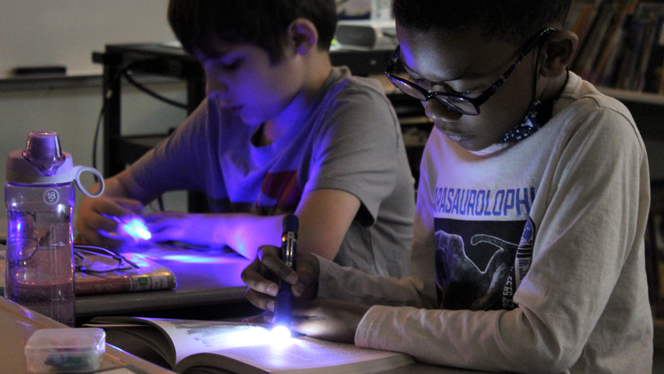 Brooklyn Scholars Charter School
In honor of Reading Awareness Month, the staff decorated their doors to replicate the cover of a book. This friendly competition between classes also promoted the love of reading. Decorated doors were evaluated on three criteria: visual impact, creativity, and craftsmanship.

New York State Senator Roxanne J. Persaud (D), in partnership with children’s author Kamla Millwood, visited some of the kindergarten students March 16. Hosted by K-2 Dean Tricia Randall, Ms. Millwood read from her popular children’s book series, “Peach the Duck.” Millwood was born in the Caribbean on St. Vincent and the Grenadines. She is the Founder/CEO & President of Palatial Publishing, established in 2015.

Our students enjoyed listening to the stories of “Peach the Duck,” and “Peach Plays Pretend.” Millwood also left signed copies of her books for scholars to add to their classroom libraries.

On March 25, students and staff dressed like their favorite storybook character and brought the book in with them.

Detroit Merit Charter Academy
The “Cat in the Hat” came to visit a kindergarten class where the cat’s grandson is a student. She came into the class with music from “The Cat in the Hat,” and had the kids dancing around before reading a story to them. They had a blast! 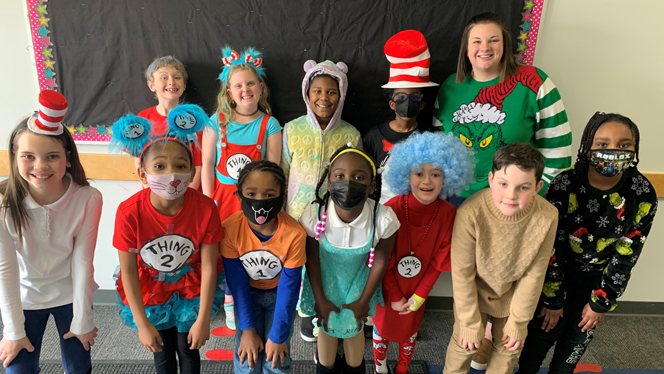 East Arbor Charter Academy
East Arbor held a variety of activities. Scholars and staff kicked off March Is Reading Month by dressing like their favorite book characters. One of the second-grade classes put together a beautiful morning assembly presentation on encouragement. Mascot Andy the Armadillo, from Texas Roadhouse in Ann Arbor, read to the K-2 wing scholars. A morning assembly started with DEAR (drop everything and read) for five minutes. Everyone celebrated Dr. Suess’ birthday by dressing like their favorite Dr. Suess character.

Paramount Charter Academy
Young 5s-eighth grade scholars participated in an EPIC Reading Challenge at Paramount Charter Academy. This appealed to all ages and is helpful for the youngest scholars because many stories have the “Read to Me” feature. The challenge began March 1. Teachers tracked the number of minutes their scholars read. In addition to completing Lexia during ELA rotations, EPIC has been implemented into small group time for independent work and encouraged at specific times in the school day that doesn’t interrupt regular whole group instruction. Students could also read at home. By the end of March, Paramount scholars listened to or read for 28,500 minutes.

Throughout the month, the middle school National Junior Honor Society students read with the Y5-second-grade students. They read in 10-minute sessions and finished their sessions with sight word/letter sound practice. These middle schoolers also served as helpers at the annual Title 1 Literacy Night. What a crew!

Pembroke Academy
Pembroke Academy welcomed author Esther Amunga, of “Makenna, the World Traveler Series,” during March is Reading Month. She read her book to the scholars while incorporating a brief writing lesson at the conclusion of the book. Several students from each classroom competed for an autographed hard-cover book as they completed their full writing project.

Quest Charter Academy
The theme this year was “Pop Into Reading!” Quest had a month full of engaging activities. The students had a chance to enter a raffle each week to win popcorn and a book. All they had to do was record the time they spent reading each week on a raffle ticket. They also had a spirit week which included: wear a hat with words, Reading Rainbow, wear as many colors as possible, and character dress up day.

In efforts to promote an excitement for reading at an early age, the Quest Student Ambassadors (grades five-seven) partnered with the kindergarten-second-grade teachers as guest readers in their classrooms. The ambassadors went to the classrooms every Friday in March and read a fun book to their younger classmates to spark an early love for reading. 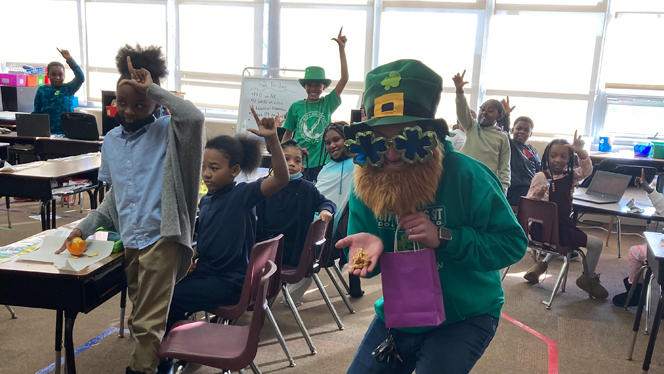 Reach Charter Academy
March is Reading Month and at Reach Charter Academy, they celebrated March by providing exciting and creative ways for students to approach reading in a new and meaningful way. The staff tried to connect each day of the month to a book or an event students could read about. Staff gave dress down opportunities as an incentive for students to read, i.e., “Slip into a good book. Wear slippers to school.” In middle school, choice and recommendation stations for books were set up.

To top everything off, the kindergarten and first-grade classes held a popcorn contest entitled. “Pop Open a Good Book!” For every picture book or 10 pages of a chapter book read at home or in class, students were to fill out and return a popcorn kernel. All kernels were hung by grade level on a hallway popcorn bucket display. The class in each grade level with the most kernels at the end of the month won root beer floats and popcorn for a book themed movie party.

A favorite may have been the day a leprechaun visited Reach on St. Patrick’s Day, March 17. The day is celebrated across the globe to recognize Irish culture and history. Staff and scholars honored St. Patrick’s Day by allowing students to wear green to promote student engagement in the rich culture and heritage surrounding this holiday. Although Irish Americans wear green to remind them they are nationalist first and foremost, many like to believe the myth that wearing green will make you invisible to leprechauns, because who wants to be pinched?

Not enough students were in green this March 17, however, because leprechauns visited the school. The students got a scare and a laugh as a leprechaun, seventh-grade social studies teacher Jeff Brickman, visited each classroom. But instead of pinches, Brickman came with a pot of gold and passed out gold treats to the students. Fifth-grade teacher Jessica Frazier got in on the leprechaun fun, too, with a complete leprechaun costume. Happy St. Patrick’s Day-Lá Fhéile Pádraig sona duit!

Regent Park Scholars Charter Academy
For March is Reading Month, Regent Park had many special visitors who read to the students. Visitors included: Detroit Ombudsman Bruce Simpson; State Representative Tenisha Yancey; Authorizer Representative from Lake Superior State University Melissa Weisberger; Eastpointe Mayor Monique Owens; Officers of the Detroit Police Department; as well as “The Cat in the Hat,” and Blue from “Blues Clues.” Principal Crystal Byse also read a wonderful book to some of the scholars, helping them practice mindfulness through literature. This mindfulness book “I Choose to Calm My Anxiety,” allows students to work through and find solutions to problems instead of acting out. Regent Park staff also participated in a door decorating contest.
Share
Tags