From Parent to Principal, Moore Appreciates Achieve’s Sense of Community

Rachael Moore enjoyed the opportunities and communication her children received at Achieve Charter Academy so much that she had to be part of the school community herself.

Rachael Moore poses with Canton Charter Academy and former Achieve Principal Jen Conley and three Achieve students at the Cherry Hill Village Festival over the summer.
As she was looking for an elementary school for her oldest son, now in high school, she applied to Achieve and was accepted. Her second son also joined the following year. When her children reached second and third grade, her oldest son had an Individualized Education Program and Moore worked closely with the resource room teachers and Sabrina Terenzi, then a dean at Achieve and now principal at Plymouth Scholars.

Moore felt compelled to take her sense of community at Achieve a step further and told Terenzi she wanted to work there. When a teaching position opened, Moore jumped at the chance to apply.

Now, she is in her 10th year at Achieve. She was a fifth-grade teacher and dean of the lower elementary and currently is in her first year as principal.

Rachael Moore gets soaked at the dunk tank at Achieve’s summer fair.
Moore lives “right around the corner” from the school, and all three of her children have attended Achieve. From her time in the parent room helping out during lunch and around the school to becoming principal, Moore has valued the closeness.

“The community is what I thought was unique,” she said. “You’re able to come in and there’s other families there. It was just the welcomeness, the openness that they had. I was able to make some connections.”

Moore said Achieve outperforming the local district in every single subject area other than third grade ELA on the M-STEP is a testament to every group of people involved. 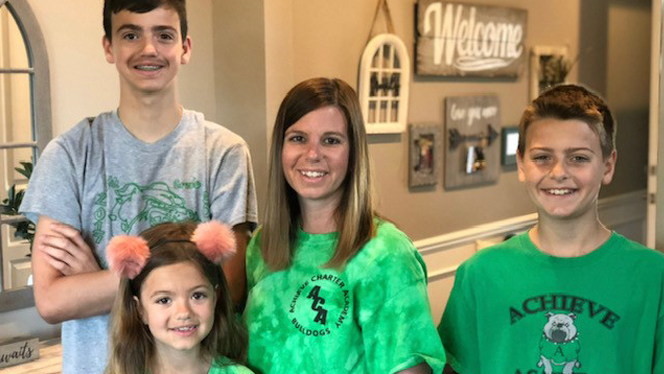 Rachael Moore’s children, Brady, Aidan, and Reese, all have attended Achieve.
“Academics is a huge focus here at our school,” she said. “The students take pride and ownership in their success. The parents have like that huge expectation, too.”

The fact that she lives in the same neighborhood as the school is just another example of Moore being ingrained in the Achieve community.

“A lot of staff are like, ‘Oh, you run into kids all the time.’ I like that,” she said. “It’s not a small town but it feels like it to me because I work here, I live here, and I see them. That’s something that I’m proud of when I think about our school.”

Rachael Moore speaks during Achieve’s opening ceremony.
As someone who has been at Achieve in multiple roles, Moore said she strives to be an active listener now as an administrator. She said her time as principal has been going well so far and is thankful to have a structured community to rely on that initially appealed to her so many years ago.

“It’s busy, but it's nice to be in the community that I’ve been in for a very long time,” she said. “I think that's helpful for sure. I think the transitions been nice as far as I know the kids, I know the families, I know the staff. It definitely helps with the position.