“I have written and directed six other plays for church,” Thomas said. “This was my first time directing a school play. The kids worked really hard to memorize lines, learn how to add character to their character, and learned five songs for the play. They had rehearsals twice per week for 10 weeks and truly challenged themselves to do their best.” 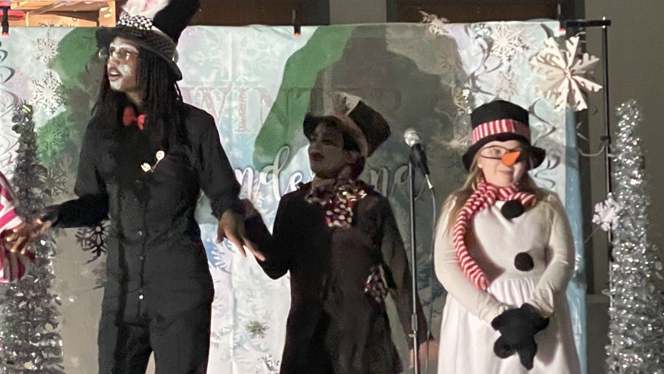 Students’ grade-levels ranged from third to eighth grade and included 20 actors, including three Alices. The play featured one bored Alice. Her mother forced her outside to play and use her imagination. Alice stumbled upon a white rabbit who could talk, he persuaded her to follow him down a rabbit hole and travel to Winter Wonderland where Alice was to help him plan the biggest, baddest, bestest, Winter Wonderland Extravaganza of all time!

Thomas explained that Alice faced opposition as she was shrunk twice, once by a clueless Duchess, and once by the evil Queen of Hearts. Through courage, perseverance, compassion, and integrity, Alice was able to defeat the Queen and host the greatest Winter Wonderland Extravaganza of all time through a fun, lighthearted, musical/play.

The play has three Alices because Alice is shrunk twice; once by the absent-minded self-absorbed Duchess and once by the Queen of Hearts, who was trying to make her disappear but instead shrunk her again.

Thomas explained a bit more about the storyline: Alice was throwing a Winter Wonderland Extravaganza with the White Rabbit, but she never had real plans. She came up with some plans on the spot during the Tea Party with the Mad Hatter, March Hare, Dormouse, Caterpillar, Cheshire Cat, and the White Rabbit; she decided there would be lots of snow, snowflakes, snowmen, and angels. As she was sitting angrily drawing her snowmen and angels, the Caterpillar used magic to turn the pictures into real life creatures. The Caterpillar then uses his magic to turn Alice back to her normal size. As he used his magic the cast sang “Let it Snow” and the Caterpillar threw giant snowflakes around. During the Extravaganza, Alice defeats the Queen of Hearts during a snowball fight as the cast sang “Deck the Halls.”

“Many of the scholars want to continue acting – they loved it,” Thomas said. “There were about 100 people in the audience. It was amazing! The parents and families loved it; they can’t wait until the next play.”

The teachers and co-directors believe it’s important to provide opportunities like this for students because it broadens their horizons to new skills and provides opportunities to showcase talents they didn't know they had.

“Students gained public speaking skills, battled their stage fright, challenged themselves to memorize all of their lines, pushed themselves to sing the songs with personality, volume, and character,” Thomas said. “They learned to become the personalities of their character.”

The students built strong relationships, learned to support one another, and learned to be part of a team. Though the grades ranged from third to eighth grade, many friendships were built.

“I have been singing and doing plays for my church since I was 12 years old,” Browder said. “I enjoy it so much and wanted to share the joy I have for musicals and plays with children. This was my first school play. I wanted to show the students there are things out there to find and enjoy. Everyone has a talent they just need to find it within themselves.” 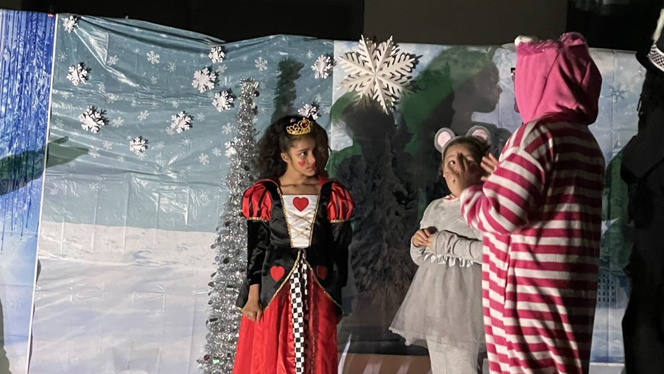 Thomas continued, “Most of the students want to return to drama club for the next play, they thoroughly enjoyed this experience. They also had opportunities to build their Moral Focus virtues as they learned perseverance and not giving up when things got hard, integrity when they promised to study their lines. Students learned to respect each other in a different way, they also learned to respect the art of theatre. Students were compassionate and encouraging to one another. When students had meltdowns behind the set, it was other students that consoled them, encouraged them, studied lines with them – it was amazing to see!”

The plan is to put on another play in June: “The Wizard of Oz.” Both teachers would love for it to be an annual thing.

“Mrs. Browder and I are so very proud of them and all of their hard work,” Thomas said.