In an effort to provide some real-world experience for her debate elective class students, Certified Bilingual School Counselor Milena Gutierrez, MA, took students on a field trip to the Kings County Criminal Court. Gutierrez’s friend, Yuri Orozco, is a court translator, and was willing to take the Brooklyn Scholars Charter School students on a tour of the courthouse and arrange for them to hear a few court cases.

“We traveled there by train,” Gutierrez said. “The tour was very personalized, and my friend explained the judicial system. The students were able to spend time in two courtrooms. The first was for misdemeanors with Judge Deepa Ambekar. She also had a judge-in training, Dale Fong-Fredrick, with her in court. The students listened to two cases there.” 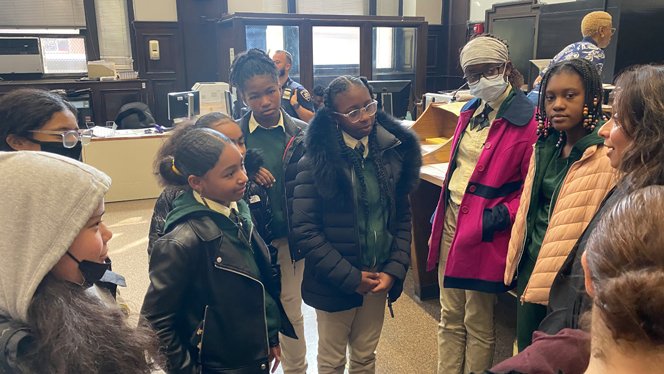 Judge Ambekar in the misdemeanor court talks with the Brooklyn Scholars students and answers their questions.

“One scholar asked her, ‘What is the most difficult, challenging thing she has to do?’ Judge Ambekar’s answer was ‘sometimes the hardest part is making the decision. I was a lawyer before being a judge. I went to college, then law school, then you have to a be lawyer for at least 10 years before you can be a judge. You gain a lot of experience in that time, but even so, making the court decision is hard sometimes.’

“It was really nice that she took the time to answer questions,” Gutierrez said. “She explained that a judge is either appointed by the mayor or selected in public elections and she talked about why she decided to pursue a career in law.” 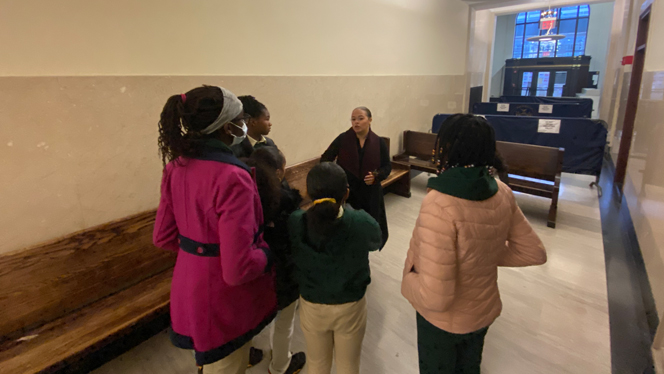 Yuri Orozco, a court translator, took the students on a behind the scenes tour of Kings County Criminal Court.

The other courtroom where the students spent time watching a case was for felonies. After the case, Judge Archana Rao also talked with the group and answered questions. Gutierrez said the judge was impressed that a debate class is offered in middle school. The students meet twice a week for 45 minutes.

Gutierrez said she felt something significant happened that day. “The debate elective has eight females and two males. Only the female students were able to go on the field trip. The judges that talked with the debate class students were females, as well. I loved that it was female judges talking to my female scholars. It was awesome!”

The students were able to listen to how the attorneys presented their cases and the interaction between the judges, attorneys, and clients. 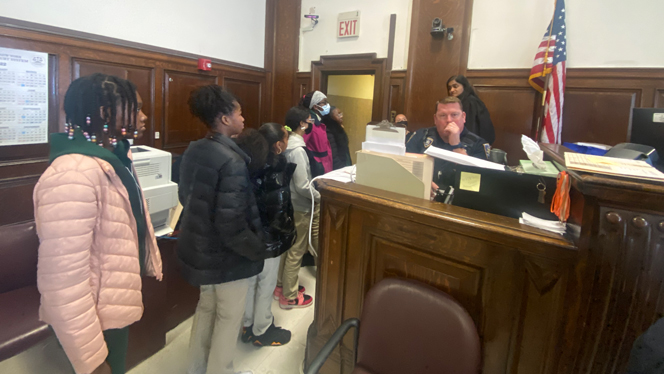 The scholars are learning World Schools Style debate format and are in the process of group preparation work. A team is comprised of three to five people who prepare together, of which three speak in any given debate.

“The motion they are working on is, should students or minors be held legally accountable for bullying other students,” Gutierrez said. “And at first, they thought that was too harsh, but now as they are doing their research to present evidence to support their cases, the students are finding that sometimes bullying can cause a person to commit suicide, so they feel it is a valid motion.” 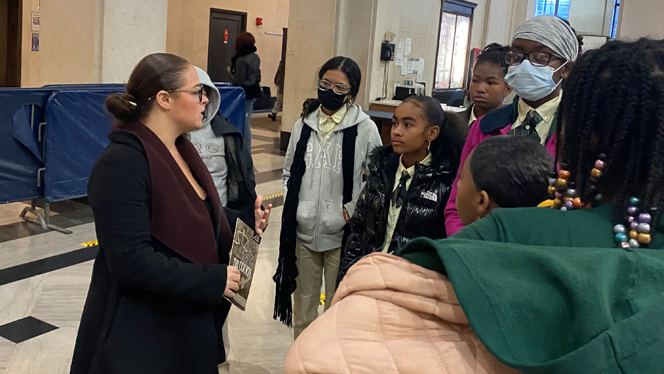 Orozco talks with the students about her work as a court translator.

Gutierrez is learning the rules of debate in more detail as she works with her students. She is politically active and presents often. She actually debated an opponent on a local Spanish news station recently. Plus, she feels she often needs to advocate for her students as the school’s counselor.

Gutierrez says her students are interested in the debate elective for a variety of reasons; all of the students are studious, and one is running for student council president. She sees a lot of them who are leaders but lack the confidence to speak publicly.

“Highlighting and presenting activities like this reinforces the importance of offering scholars a closer look at what happens outside the walls of our school. It was an inspiring, but also a thought-provoking experience for my debate group.”