In early spring, Seventh- and Eighth-grade History Teacher Scott Wenzel received an offer he couldn’t refuse. His name had been mentioned as a history teacher who might be interested in a unique project.

The River Raisin National Battlefield Park, a park in the National Park Service (NPS) system located in Monroe where Triumph Academy is, has had its staff involved in this program since it began nine years ago. Some people there knew Wenzel and made the recommendation. 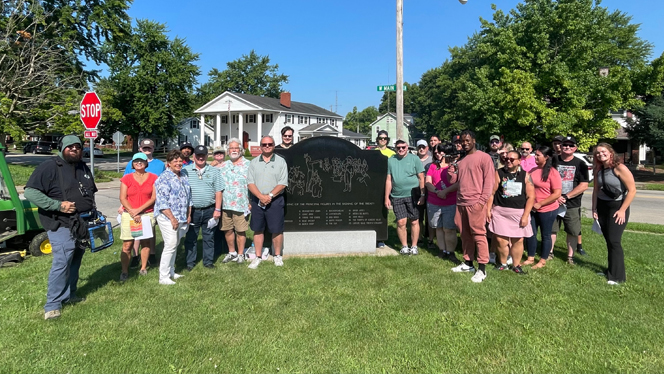 Triumph Academy Seventh- and Eighth-grade History Teacher Scott Wenzel, participated with these educators in the Journey Towards Understanding. Here is the larger group at the Treaty of Greenville site in Ohio.
“I accepted the offer. This two-week program in late July included Native American tribal leaders, tribal youths, educators, curriculum specialists, college professors, National Park Service staff and filmmakers to document the journey,” Wenzel said. “The program is called the ‘Journey Towards Understanding’ and about 30 people of all ages took part.”

The educators were given the assignment to develop a curriculum lesson about something they learned for the type of students they teach whether that is college-level, high school or middle school, like Wenzel teaches. He is about to start his seventh year at Triumph.

Wenzel visited the Tecumseh Monument also at Thamesville, Ontario.
Program members were taken by bus travelling to historic sites significant to the particular American Indian tribe chosen, in this case, Ohio, Michigan, and Canada. The Journey Towards Understanding experience is funded by grants, the NPS, and participating tribes. There is no charge for the participants.

Wenzel explained more of the purpose behind the journey. “It was discovered that each Indian tribe experienced re-location to Indian Territory land differently. Each journey was unique and each year, this trip re-creates that journey.

“It has to do with the Indian Removal Act of 1830 signed by President Andrew Jackson,” Wenzel said. “The act allowed Jackson to negotiate treaties with tribes living east of the Mississippi River. About 50,000 American Indians were relocated to the Indian Territory in Northeast Oklahoma.” 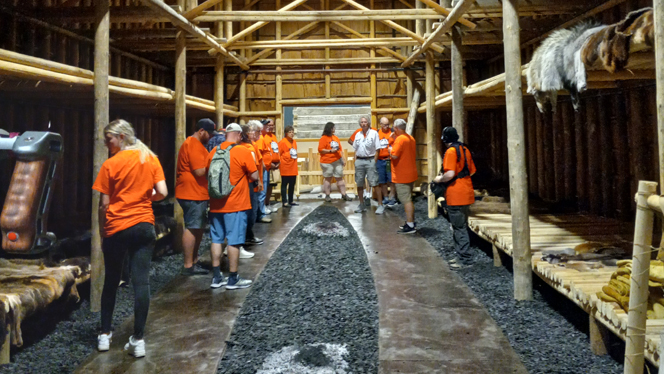 The River Raisin National Park in Monroe, Michigan, has built this replica of an American Indian longhouse.
According to Wenzel, this year’s journey started in Ohio then went to Monroe, Michigan, to visit the River Raisin National Battlefield Park and other sites. The group also went to Ontario, Canada, where they met with the Delaware tribe. Then the group continued back through Ohio and Indiana.

“We stopped at many major battlefields for the War of 1812,” he said. “We also stopped at some sites where treaties were signed between the tribes and the U.S. government, which is where I started to get the idea for my lesson plan. It begins around the War of 1812 to the Indian Removal Act of 1830 because that topic is covered in the history textbook I use.”

Wenzel has written a proposed lesson plan where students are asked to think about the domino effect and whether events throughout history, like the Indian Removal Act, can affect other events taking place later.

This is a view of Hopewell Indian Mounds in Chillicothe, Ohio. One of the educators wrote a lesson plan based on what took place here.
“Can one event cause things to happen years afterwards? I’m choosing to focus on the treaties of this trip,” Wenzel said. “What I want to get through to the kids is that the Indian Removal Act was not a one event thing, that things had been leading up to this for years. Each one of these events is a domino being set up and waiting for one person to come and knock them all over. In this case it was President Jackson.”

After visiting several sites east of the Mississippi, Wenzel and his group left Ohio to travel to the Indian Territory in Northeast Oklahoma.

“It was the path the tribes were forced to take, but we took it on bus,” Wenzel said. “It was roughly eight hours for us, but it was 80 days for the Indian people walking. It was eye-opening to even think about trying to cross this terrain by foot.”

Another site visited was Fort Recovery in Fort Recovery, Ohio, built by the United States Army in 1794.
The group spent the last few days staying at Indigo Sky Casino, the tribe’s casino in Wyandotte, Oklahoma. Wenzel and the four other educators worked on their curriculum proposal once there. Since the lessons had a lot of detail, it will most likely be a two- to three-day lesson. Eventually, the lesson plans will be shared to the NPS website. The educators also presented their lesson plan to tribal members to get input and feedback.

The group did a variety of activities and visited other American Indian tribes while in Oklahoma.

“This experience has given me more insight into the American Indian culture,” Wenzel said. “I can provide more of a visual to my students. When it comes to the Indian Removal Act and the Trail of Tears, textbooks only talk about the Cherokee Indians and relate the Trail of Tears to them. What you don't realize is all these other tribes have their own removal trail. Their own story. It’s very impactful.”