In early December, schools around the world, 180 countries, celebrate Computer Science Education Week by doing an Hour of Code. It’s an opportunity for every child to learn how the technology around us works. It’s designed for all ages in more than 45 languages.

The Hour of Code started as a one-hour introduction/tutorial to computer science, designed to demystify “code”, to show anybody can learn the basics, and to broaden participation in the field of computer science. It has since become a worldwide effort to celebrate computer science, starting with one-hour coding activities but expanding to all sorts of community efforts. 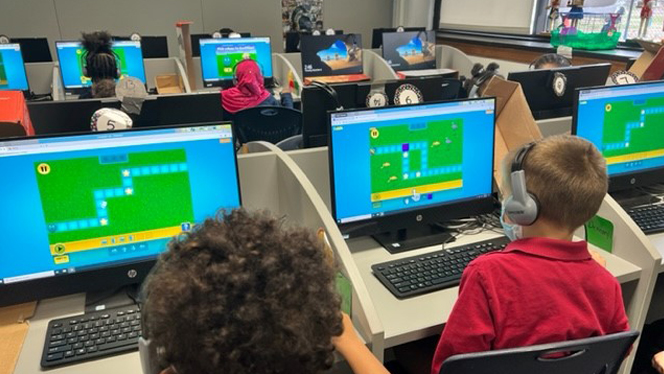 “Computers are everywhere, changing every industry on the planet,” said Blumstein. “But only 51% of all high schools teach computer science. The good news is, we’re on our way to changing this. If you've heard about the Hour of Code before, you might know it made history – more than 100 million students around the world have tried an Hour of Code. Even leaders like President Obama and Canadian Prime Minister Justin Trudeau wrote their first lines of code as part of the campaign.”

The Hour of Code website has countless options from which students can choose. Some of the sessions that Blumstein taught were: the Dance Party; Ella and Ana’s Frozen; Star Wars; advanced data design curriculum; and one classroom made paper towers which is a part of the regular discovery code curriculum.

Blumstein printed Hour of Code certificates the students could take home to encourage them to talk with their parents about creating their own apps or games.

At River City Scholars, K-8 technology teacher Stacy Zbikowski organized and had scholars participating in this global Hour of Code project. It is introducing tens of millions of students worldwide to computer science, inspiring kids to learn more, breaking stereotypes, and leaving them feeling empowered.

“Coding teaches kids so many skills,” said Zbikowski, “such as problem-solving, math and science, reading; collaboration, creativity... essentially it teaches them to think.

“The programs we used in K-8 were fun, almost like games, so scholars had fun while learning valuable life skills. I encouraged my scholars to continue with coding even after they leave River City, they can make a lot of money in a future computer science career.”

“We had a great time at the Hour of Code event. We were fortunate to have almost our entire class, 25 students, attend. We were also able to welcome my husband, Doug Pelletier, to our room before we left to show us a robot he built with his First Tech Challenge middle school robotics team,” said Pelletier.

“This was doubly timely because that week in our reading unit, we were learning about space robots. So, first we saw a real robot and learned how Mr. Pelletier used coding to program the robot’s movements and actions, then we went to SVSU where we were able to delve in deeper to the art of writing code. The students were able to synthesize these two activities and relate them to the stories that we had read in English Language Arts as well!”

The event at SVSU was held at the Marshall M. Fredericks Sculpture Museum, so students were able to tour it. The kids were able to eat in the school cafeteria too, “easily the most popular part of the day for our students,” said Pelletier. “It was a terrific day! I highly recommend it to any schools to apply to attend next year.” 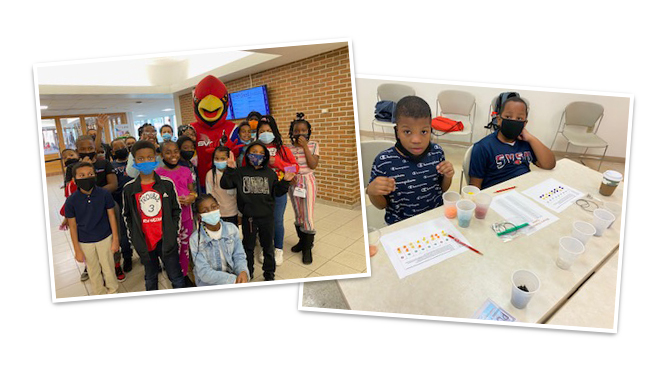