Quest Scholar Dreams of Being a Professional Race Car Driver

At 10 years old and starting fifth grade at Quest Charter Academy, Hudson Bowman is already dreaming about his future career. Becoming a professional race car driver is at the top of the list. 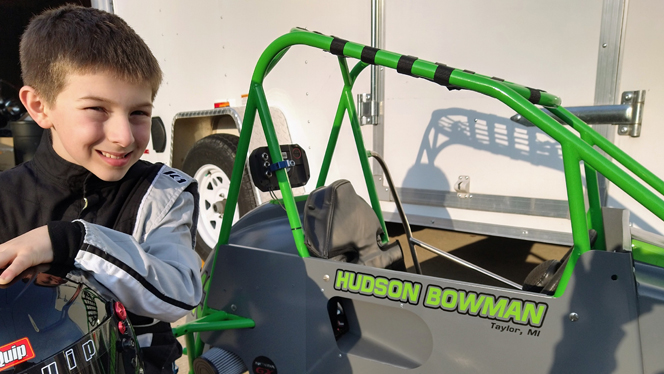 Hudson sits proudly by his quarter midget car.
This dream goes back a few years and he’s been working on it with a lot of support from his family – dad Travis, mom Megan, also a second-grade teacher at Quest Charter Academy, and sister Henley.

“Hudson has always liked racing and cars,” said Travis. “When I was in the Air Force, I had a sergeant whose kid did quarter midget racing. We thought that was cool. When we moved back to Taylor, I saw they were doing driving experiences at our track. So, we took Hudson there and he did some laps on an actual track and here we are four years later.”

Michigan Motorsports Racing Association (MMRA) is dedicated to youth racing for ages 5 to 16. The MMRA club and track are located on the grounds of the Oakland County Sportsmen’s Club in Clarkston, Michigan, about an hour away from Taylor, Michigan, where the Bowman family lives. For families who are interested in trying out the cars and racing without immediately investing in a car, they can apply for a scholarship, explains Travis.

“After Hudson did the driving experience, I applied for a scholarship,” Travis said. “The club has six cars and trailers, so they can give six scholarships. Four years ago, we received a scholarship. We surprised Hudson with it, in December when his birthday is. We got hooked and now we have our own car and trailer.” 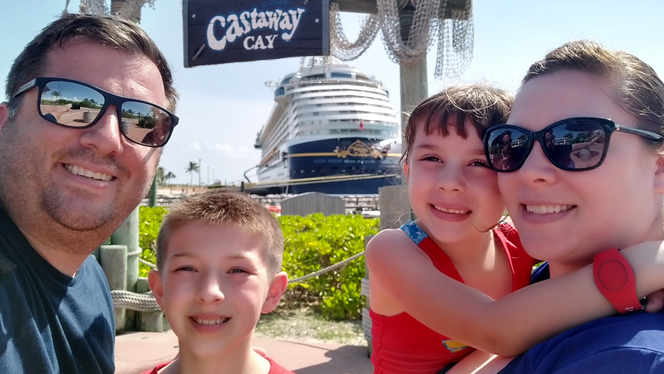 A Bowman family vacation photo from left, Travis, Hudson, Henley, and Megan.
Hudson races quarter midget cars. When a racer begins, they do rookie training. The kids learn about racing rules, and what the different flags and hand signals mean. They learn how to get lined up and how to pass a car.

“Then they get in a car and have them go really slow while they are learning and practicing,” Travis said. “The car has a restrictor plate, which makes the car go slower than its full potential. Then there is another level of rookie training. Before a child can race, they need to be approved by the rookie director. This process takes as long as is needed for the racer and parents to feel comfortable. Hudson was ready to race by the end of his first summer.”

Besides the rookie class, there are eight racing competition classes. Hudson was in the Senior Honda class this summer. The competition class is decided by how much the racer weighs, their age, and the weight of the car’s engine. There were nine races in the Senior Honda Waterford Club Points Series throughout the summer. They track points totaled in the best of seven races in which Hudson finished fourth in his class.

With each group, they run a preliminary race with 20 laps and a feature race with 40 laps. The racetrack is 1/20 of a mile, so the races are 1 mile and 2 miles, respectively. 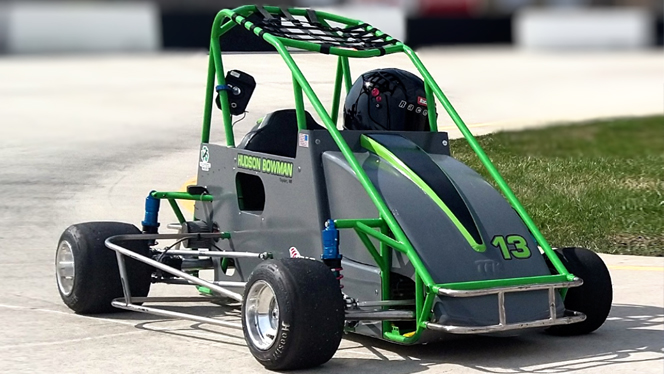 Hudson just finished racing his fourth season and has received many trophies, ribbons, and plaques.
Travis is vice president on the club’s board of directors. Families involved in the club must commit to volunteering. There are about 30 families.

“Because the track is on the Oakland County Sportsmen’s Club property, we volunteer for the fish fries, cleaning up the grounds and then families are running the races, concessions, and everything else needed on race day. The families involved in the club are key to keeping the club going. It’s a real commitment for every member. We are really just one giant family,” Megan said.

“COVID didn’t slow us down too much either, due to the fact that we are outside. Concessions changed a bit, and instead of being in the tower where they do scoring during races, everything was moved outside, but not too much else needed to change.”

Hudson enjoys the friendships he’s made and racing. “My quarter midget car goes about 45 miles per hour,” he said. “I’ve been in some accidents. This year I rolled my car.” 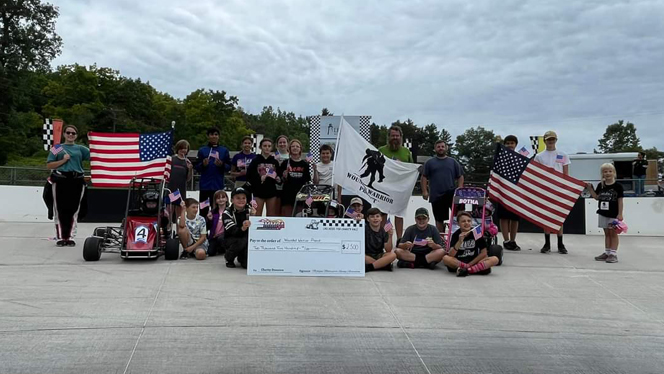 In mid-August, the club raised money during race day for the Wounded Warrior Project.
Travis quickly explains that the “kids have all the same safety gear as the adult race car drivers – fire protective gloves and clothing, helmets, five-point harness, and roll bars. And when there’s an accident all the dads are out on the track quickly to help get the kids re-situated. The drivers have to take a safety class every year, as well.”

“I’m the pit crew and engineer guy. I used to work on cars as a kid and helped my dad. I’ve worked in the maintenance pool in the Air Force and currently work at Penske as a supervisor. It has been a real learning experience because this is a tiny, tiny car, so a small adjustment can really make a difference either good or bad.”

Megan and Travis met during middle school in Taylor. They have been married 14 years. They traveled in their early years due to Travis’ time in the Air Force to Virginia, Alaska, and Illinois. Hudson has the unique honor of being born in Fairbanks, Alaska, where the family was based at the time. The Bowman family returned to Taylor four years ago.

Hudson has accumulated many trophies, ribbons, and plaques in his four years of racing. His room is covered with his accomplishments. Hudson loves racing and the whole experience. He’s got his mind set on staying in this sport for many years to come. 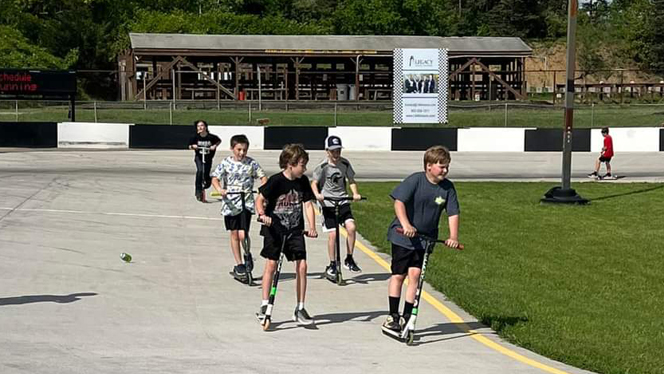 Racers having a little fun racing around the track under their own power on scooters.

Good luck Hudson, we’ll check back in on you in a few more years.