Metro Charter Academy Dean of Upper Elementary Staci Russell is a first-generation rodeo athlete. She never imagined herself being a “cowgirl,” but she is glad the world of rodeo found her. 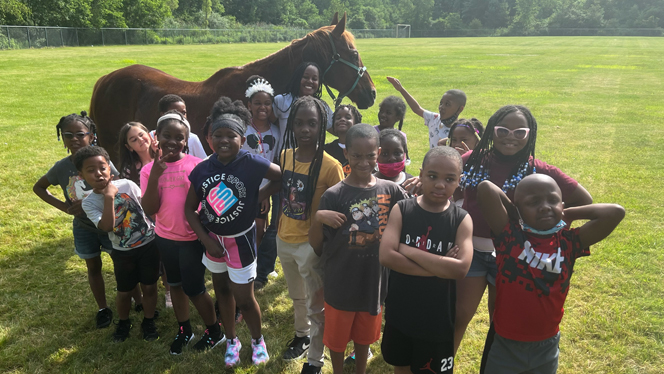 Dean Russell and Reese’s Cup had fun visiting the scholars at Metro Charter.

In June, she participated in a rodeo at Wayne County Fairgrounds featuring African American cowboys and cowgirls. Russell was interviewed with three others, including the rodeo’s founder Nicole Scott, for the Live in the D show on Local 4 News in Detroit. Russell competed in cowgirls barrel racing during the rodeo.

Russell did not grow up around horses and started riding horses at age 28. She was introduced to her horse, Reese’s Cup, and the world of rodeo by her trainer, Keith Morrell. Shortly after, she began competing in barrel racing and pole bending at rodeos and jackpots.

During a typical season, Russell will travel with a group where they share the driving. She does not have sleeping quarters in her horse trailer, but travels with someone who does. The group maps out the competition route. March through May is typically spent in southern states where it is warmer and then back to northern states in June through September. 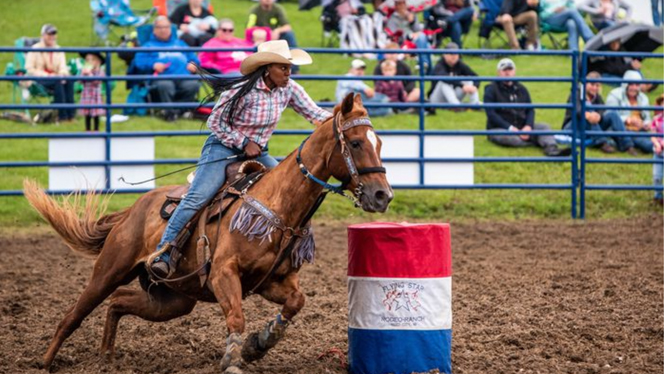 “So, it’s intense,” Russell said. “The year I won (2017), I started training in January, and the season started indoors with the first rodeo at Michigan State University in February. I won second there, which gave me a good start for the season because there was a cash prize of $1,200.”

In 2016, Russell and her horse Reese’s Cup, or Reese, traveled and competed in the Mid-States Rodeo Association (MSRA) and International Professional Rodeo Association (IPRA) circuits. She clinched a spot for the 2018 IPRA top 20 barrel racers. She is a three-time MSRA finals qualifier (2017, 2018, 2021) and the 2017 MSRA Barrel Racing Champion, becoming the first African American to win a MSRA title.

COVID-19 mostly shut down rodeos during 2020 and 2021. This year, rodeo competitions have opened back up. Various circuits rely on points earned by the place earned in the event, so it’s important to compete in as many rodeo competitions as possible. 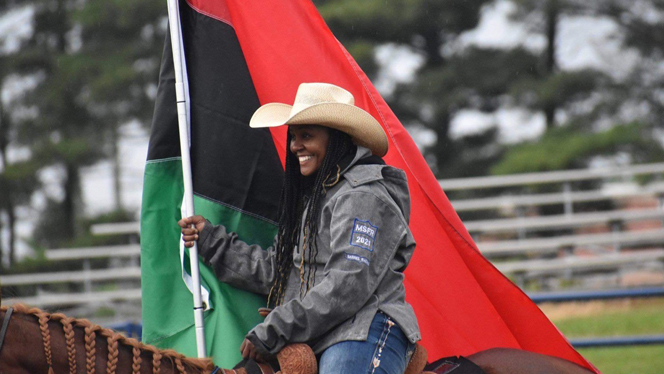 Russell carries the flag into the arena.

“To put yourself in the best position to win and be high in the rankings, you mostly have to be competing every day for months” Russell said. “This summer, I’m taking it a bit slower with gas prices as they are and the fact that my horse trailer was totaled in an accident last summer. Reese was OK, but I have not bought another trailer yet. I can also tell that Reese, who is 19, has a tougher time in bigger arenas. I’m exploring the option of getting a second horse.”

Spending time with Russell you soon see what a dynamo she is and quickly feel her positive energy. She’s been a rodeo competitor for 10 years and an educator for 15 years. Russell came to Metro Charter Academy as a dean in November.

When Russell is in the midst of either pole bending or barrel racing, it’s a complete thrill and adrenaline rush for her. 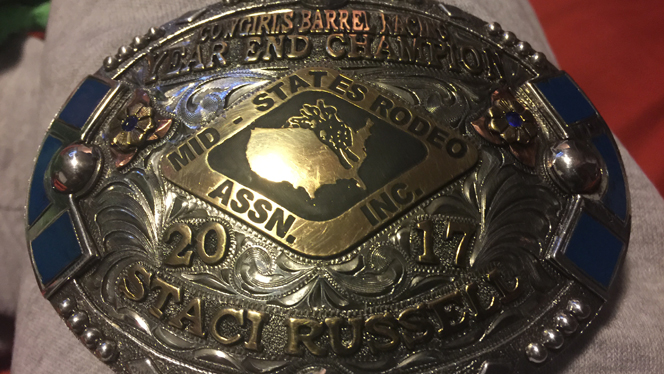 In 2017, Russell won the MSRA Barrel Racing Champion title, becoming the first African American to win the title. She received this belt buckle.

“Going that fast and becoming one with the horse, everything has to be in sync and in the zone,” Russell said. “In the middle of the run, everything is in slow motion for me. I can hear Reese’s footsteps; I see the dirt flying. Being in the moment and just being on top of a creature where I know he is giving me 100%. He is giving me his full heart. I absolutely love that feeling.”

You would think that being a teacher would work well with the rodeo competition life, but Russell was working on the road with her computer during the time of her most intense competing.

“I would be in the middle of nowhere and I’d be searching for Wi-Fi like at a McDonald’s,” said Russell. “I didn’t do as much driving either because I was working as we drove. At that time, working from your computer was a bit of a novelty, it wasn’t like now when we are all used to doing it.”

Rodeo is a way of life that is forever in her heart. She is glad to have had the opportunity to meet great people across the United States and Canada. Those people have made an impact in her life by being supportive and helpful along the way. 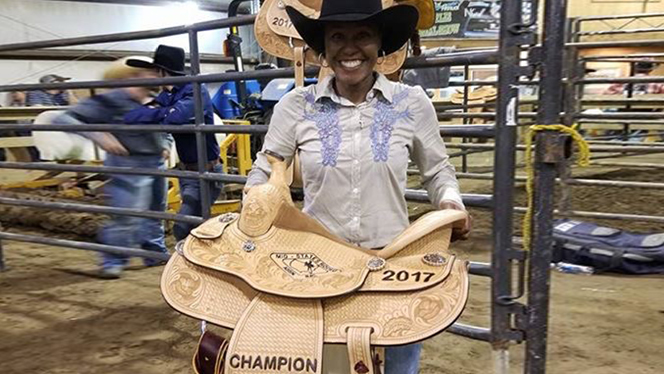 “I also love the crowds at the rodeo. It doesn’t matter what state you are in; the crowds are going to cheer you on,” Russell said. “If something bad happens, they will gasp. If you get back at it, they will cheer. I love that too.”

Growing up, Russell played basketball and softball. She went to Tuskegee University in Alabama on an academic and athletic scholarship for softball. She made the 2005 Southern Intercollegiate Athletic Conference Softball All Conference team and had the highest grade point average on the team. Graduating with a Bachelor’s in Business Administration and Sales and Marketing, Russell continued her education at Hampton University in Virginia, where she earned a Master’s in Teaching.

Russell still has goals she wants to accomplish – to win an IPRA title and qualify for the National Finals Rodeo. This is not an easy task; however, Russell knows that with dedication, hard work, practice, and a good horse … anything is possible.

Furthermore, Russell has a long-term goal; she wants to open an equestrian center for urban youth, passing on the love of equestrian sports to young people.