As an end of year school project, eighth graders in Scott Jaracz’s English Language Arts class had the opportunity to perform “A Midsummer Night’s Dream,” a comedy written by William Shakespeare. It just so happens that the best performance space was outside the South Pointe Scholars Charter Academy school building in Ypsilanti, Mich.

The best performance space was outside the South Pointe Scholars Charter Academy building making it an Art in the Park play performance.

Jaracz’s students performed two shows so that all eighth-grade students could participate. The students performed Acts III, IV and V. The play is set in Athens and consists of several subplots that revolve around the marriage of Theseus and Hippolyta. One subplot involves a conflict among four Athenian lovers. Another follows a group of six amateur actors rehearsing the play which they are to perform before the wedding. Both groups find themselves in a forest inhabited by fairies who manipulate the humans and are engaged in their own domestic intrigue. The play is one of Shakespeare’s most popular and is widely performed.

“They had a blast with it,” Jaracz said. “To see them get so excited about something that didn’t really have to be done, that’s what school is to me. It’s so important, not just for this class, that we learned Shakespeare, and understand the themes, but it’s more important to show your classmates you’re leaving behind that there’s more to school than just hunkering down and studying the textbook.

“We brought this to life, and everybody took part in some way whether it was creating costumes or making props. I even had some students who didn’t have speaking parts in the play, but for the couple weeks when we were practicing, they helped their classmates rehearse their lines and were really quizzing them on it. That’s just not what I anticipated.”

At first Jaracz was going to have the kids perform a couple acts within the classroom, then a few of the teachers said they would be interested in watching the performance. Then, it was decided to make it available for all the students to see, so it was moved outside. Several teachers offered their time and expertise: Jamie Hunter, eighth-grade math teacher; Dottie Mueller, teach force teacher; Heather Vollano, art teacher; Steven Ventura, physical education teacher; Wesley Monk, music teacher; and Liz Scott, seventh/eighth grade social studies teacher.

In the play, there are about 12 – 15 speaking parts. Jaracz let them read from a script. He didn’t want anyone to feel forced to memorize it. He wanted his students to really understand the play.

For Jaracz, the play’s theme is about chaos.

ELA eighth-grade teacher Scott Jaracz did not want anyone to memorize the play, so students were able to read from a script.

“At the end, the bad fairy, Puck, addresses the crowd. Basically, he says, ‘if we offended you, we didn’t really mean to,’ and then he says, ‘maybe this was all a dream.’ So, there’s chaos and then everything comes out ok in the end. It kind of mimics the past two years,” Jaracz said.

Jaracz made the costumes easy. He learned about a website that sold irregular t-shirts where one sleeve might be longer than the other, or the stitching might be messed up. He bought white and gray t-shirts and let the students decorate them however they wanted.

“The students labeled the shirt, actor or crew, depending on which they were, and they were to decorate it with things that they accomplished with the play,” said Jaracz. “They got really creative. One student decorated her shirt with her character’s traits using symbols and signs. It made her character come to life.”

Asked if any of his students got bitten by the drama bug, Jaracz responded, “Oh my gosh yes, one student in particular is the quietest student in my class, I assigned her as my teacher’s assistant and asked her to walk around to the groups practicing their materials. She had a fairly large part too but wasn’t putting a lot of enthusiasm into her lines. Until she was on stage and actually did her performance. She was incredible!

“I asked her parents if she had done much of this and they said, ‘No, that this is new to us.’ I noticed similar things with about 10 other students too. I hope to go watch them in their high school plays. I saw a lot of growth and potential in these kids.”

As far as set design, Jaracz gives a lot of credit to art teacher Heather Vollano. “I asked if she would be willing to help me and she said yes immediately and put a lot of time and effort into it with the students. She had great ideas and was willing to spend extra time to make it come together.” 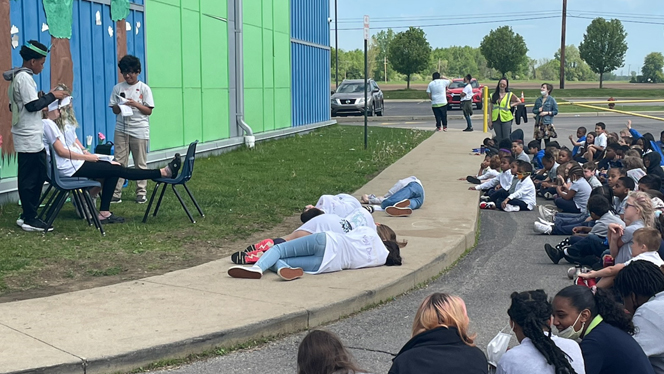 This is the first year for Jaracz at South Pointe. Before that he was at another National Heritage Academies school for three years, Warrendale Charter Academy. For Jaracz he sees putting together a spring play as part of a new tradition. Dean of Middle School Darren Terry challenged him to do all the acts next year, maybe an act a day, like a mini-series!

Jaracz’s response, “That’s the cool part about teaching, it can transform at any time!”