Helping others comes naturally for Lemar Tabb. The longtime pastor’s position as a social studies teacher and athletic director at Regent Park Scholars is just another avenue he uses to assist those in the community.

His impact has been felt around the school as an all-around fixer of problems. He helped make drop-offs and pickups easier for Regent Park’s parents and students, has served as a go-to person for technology problems because of his church’s virtual sermons, and is a role model for students.

“For me, teaching is ministry. Being at the school is a way for me to minister to the needs of the community,” Tabb said. “This is just second nature. Going to work is not a job, it’s a passion. I enjoy watching the children learn and seeing the impact. I don’t only teach, I’m also the male mentor at our school.”

Tabb has been in ministry for more than 30 years and is a pastor at Lighthouse Community Church of Detroit. His sermons mirror his lectures at Regent; “everything I do, I try to make it relevant to today,” he says.

His established connections with the city have come in handy, especially for solutions to problems that require going through red tape. For Regent Park scholars, that issue was one that Principal Crystal Byse said had been a concern since she came to the school nearly seven years ago. One of Tabb’s assignments is to stand on the corner of Rex Avenue and Maddelein Avenue during heavily congested arrival and dismissal hours.

“Parents were getting irate,” he said. 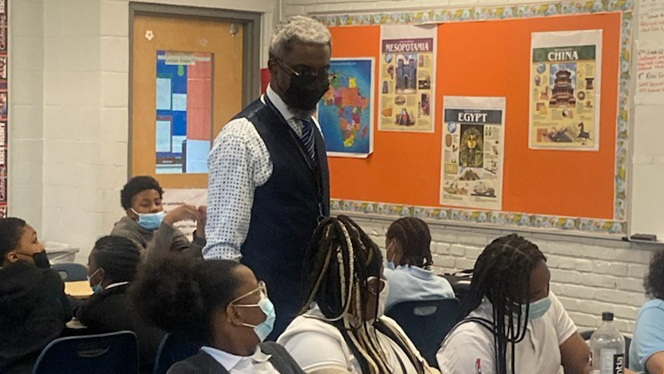 Tabb’s connections as a pastor gave him direction on how to address the problem. He put together a petition, went door to door, and asked the school’s neighbors if they would be OK with stop signs on all corners surrounding the school and one-way streets on the block during arrival and dismissal times, and they agreed. The process started in September 2021 and was completed in February, and it might not have come together that quickly if not for Tabb’s work in the community.

“He has been a tremendous asset to our school community since his first day,” Byse said. “He has been flexible and dedicated to helping to improve the culture and climate of the school. He knows many people in the community, and upon his arrival, met several parents who knew Pastor Tabb outside of the school environment.”

Tabb’s outreach extends to the Future Leaders of Tomorrow program he started in his first year at Regent Park. The program’s mission stems from another mentoring program from his time as a youth minister, Triple S, which stood for the light of the Lord from the sanctuary to the schools to the streets.

“Twenty-some years later, I’m doing just that. The part I enjoy is when parents call and ask if their other students that don’t even go to our school, if they can attend our program,” Tabb said. “When a child has matriculated to high school and wants to come back just to sit in because they like the connection or they got so much out of the program that they miss it. That is something that I enjoy doing.”’ 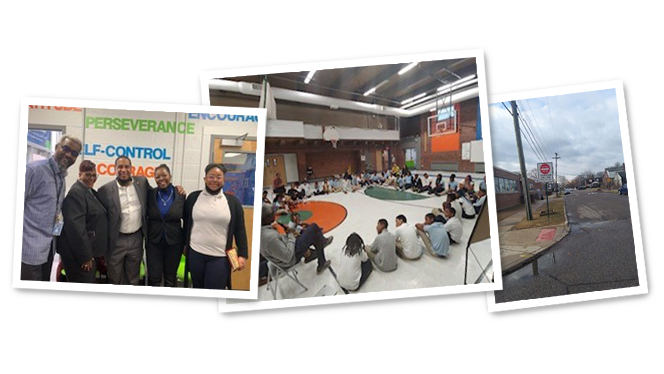 Tabb tries to provide an example of how to act for scholars and looks the part in a suit and tie. He has guided them through field trips to learn about the history of Detroit and brought in speakers such as former welterweight champion boxer Milton McCrory through the mentoring program.

“I want them to see a different view of what a man can be or should be,” Tabb said. “In my mentoring program I invite different individuals in from all walks of life so that they’ll get a chance to see what it’s like.”