Just in case pizza and cookies weren’t a big enough draw for families, East Arbor Charter Academy hosted a magician for an event to cap off the end of summer.

Jeff Wawrzaszek of A2 Magic performed his act of illusions and comedy, calling for volunteers from the audience to assist him throughout, to the delight of all in attendance. Wawrzaszek, an award-winning magician who has been putting on shows for 50 years, performs over 400 times a year.

“Students participated in tricks like pulling a pretend rabbit out of a hat and making a balloon disappear,” East Arbor K-2 Dean Ryan Rowekamp said. “The students were so excited and amused when the magician was making magic happen. The adults also found humor in his jokes throughout the show.”

Families ate food and enjoyed the evening outside at the school. 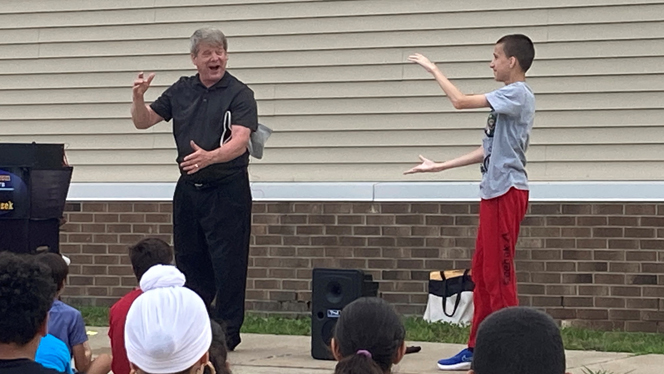 “This magician is new to East Arbor, however based on the great turnout, we would like to do more events like this in the future,” Rowekamp said. “It was a great event to get our community back together before the school year begins.”