Young 5s Teacher Michelle Bruinsma works year-long with her students in learning their ABCs. She calls it her ABC Boot Camp. For the long-time Eagle Crest Charter Academy teacher, the ABC Fashion Show is the culmination of her students’ ABCs education.

Bruinsma quickly gives credit for this curriculum to Greg Smedley-Warren, who has the website The Kindergarten Smorgasboard, and created the materials for ABC Boot Camp. Bruinsma has found that with her Young 5s students, she takes a bit more time working with the scholars when learning the alphabet. 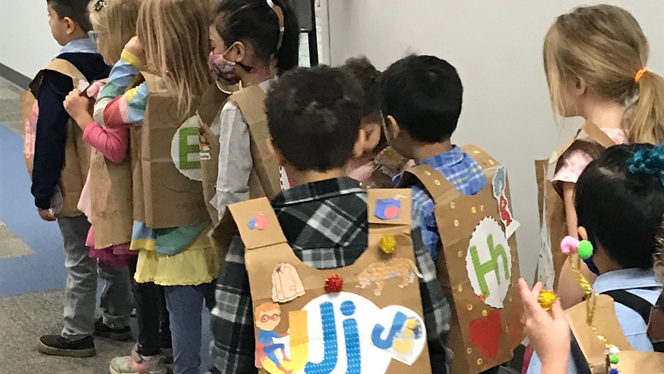 Scholars got very creative in decorating their vests.
“I start the school year going through the alphabet once really quickly, one letter a day for 26 days,” Bruinsma said. “Then we go through a second time, and this time we really focus on handwriting each letter, learning the strokes, how to form the letters correctly, and working on the pencil grip. Then we go through a third time, and we focus on words that start with that same letter sound. Then we celebrate with a fashion show. And now, we're moving on to rhyming word families.”

For the fashion show, Bruinsma assigned each student a letter. She and her Paraprofessional Tamara Barber created the vests out of brown paper bags. The students then took home their vests to create their fashion art. 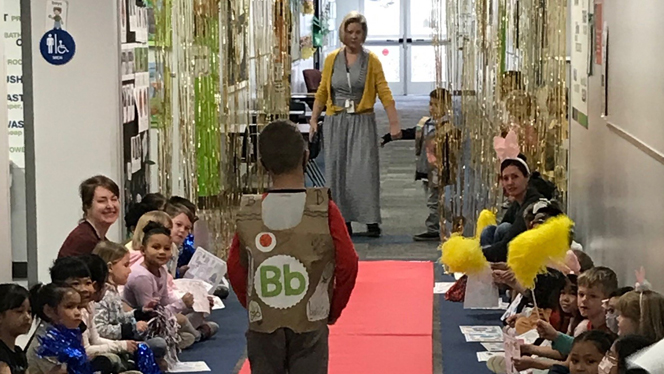 Mr. B walks the red carpet as the kindergarten students cheer him on.
The students decorate their vest with their letter and items that start with that letter. Part of Boot Camp has Bruinsma creating a large poster for each letter. All the students help name items that start with that letter. She typically draws the items on the poster. She included each of the letter charts in the packet the students took home, so they could cut the poster apart and use the items.

“I enjoy hearing about how the students created their vests. They tell me about mom, dad, grandma, grandpa, siblings, even babysitters helping them draw, paint, and decorate their fashion art,” Bruinsma said. “They have used clip art, glued or stapled items onto the vests. They’ve hung toys that start with their letter to their vest to make it look like fringe, used poof balls, glitter, pipe cleaners, and stickers. It becomes a real family project.”

The scholars celebrate what they learned in the ABCs Fashion Show.
Students practiced walking the red carpet doing their best fashion show walk and some dressed up for it. During the fashion show, Bruinsma announces each model and describes their ABCs fashion vest as the student models their unique creation with music playing.

The Young 5s students had an audience of the other three kindergarten classes who watched and cheered on their letter. They had pom poms and decorated ABC letter pages to make their letter person feel special.

“We do the fashion show at year-end when I am more confident students can say the alphabet, identify the letter, say the sound of the letter, and know some things that start with that letter sound,” Bruinsma said. “This is the end of our third trip through the alphabet and a fun way to celebrate.”