The opportunity to make a difference in someone else’s life is often just one act of kindness away. It’s something Flagship Charter Academy Instructional Paraprofessional Anitrus Simmons knows well from volunteering at Gleaners Food Bank over the years. 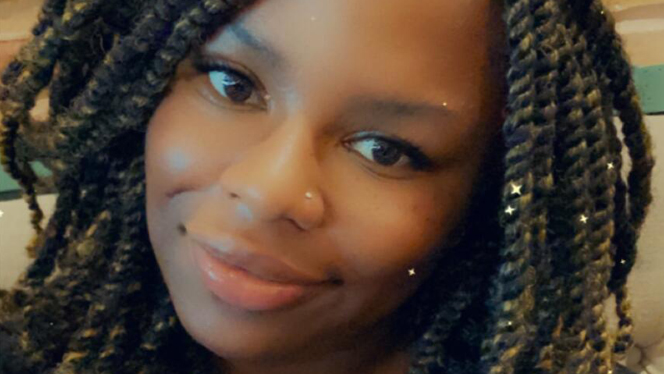 An email from Gleaners prompted Simmons to ponder the logistics of helping with the annual Stamp Out Hunger effort which supports the National Association of Letter Carriers annual nationwide food drive on May 14. The drive has been using postal networks to collect food donations since 1993.

Simmons wanted to help but knew she would need help as well.

“I knew that I couldn’t complete the task alone,” Simmons said. “The strategy was for staff only to get involved but after speaking with my colleagues and a few students, I saw that this would be a great opportunity for our students to have an impact on their community, too.” 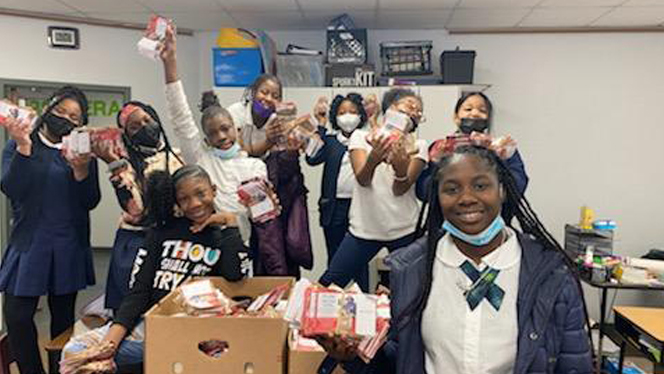 Student and staff volunteers were tasked with stapling postcards onto food collection bags that would be placed in mailboxes throughout the area. Two afterschool sessions were needed to complete the 8,000 bags. Additional teachers and lunch aides helped during their free time as well.

“Students were beginning to tell their friends and word got around fast,” Simmons said. “The eagerness and willingness of the students warmed my heart.”

She also used the opportunity to relay that some in Michigan face difficulty acquiring food. In Michigan, 1,299,020 people are facing hunger, and of them 305,190 are children. One in eight people face hunger while one in seven children face hunger in the state. 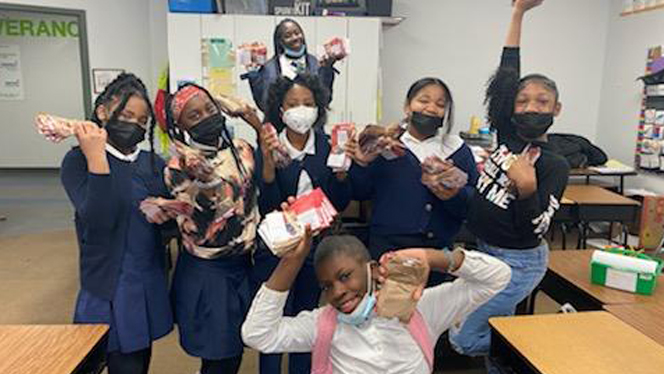 “Many students were curious to know why we were stapling postcards to bags and the impact it would have on the community,” Simmons said. “I explained to them that they were step one of three steps. We were the difference makers in a statewide hunger decrement.”

Attaching the bag to the postcard reminder makes a significant difference, Simmons said. Typically, over one million pounds of food are collected on that one day in southeastern Michigan.

“Overall, I had no idea that I would receive so much support,” Simmons said. “I appreciate the staff and students for their dedication and time. It takes a team to get things done!”