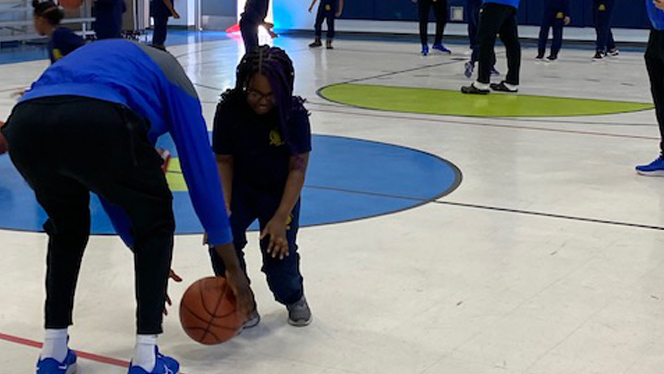 Team members did drills with the kids.

At Riverton, each classroom is named after a college or university. Ramdhanie’s class is named after Hofstra University, which is about 30 minutes from Riverton in St. Albans, New York.

“This visit was arranged by a substitute teacher that worked in my class, Miss Veta Williams,” said Ramdhanie. “She used to be an assistant coach for the women’s basketball team at Hofstra, and when she saw the Hofstra banner in the classroom, she was so excited. She said she knew the men’s team very well and she was going to make arrangements to have them come meet our scholars. It took time and a lot of work, but she persisted. It was so generous and kind of her to do that.” 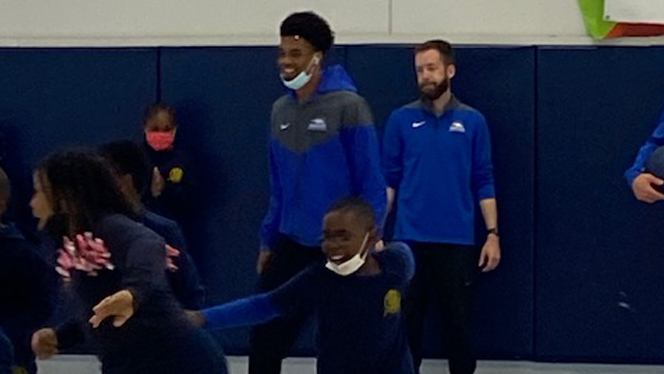 The Hofstra basketball team and Riverton’s students scrimmaged together.

Scholars heard about teamwork, good sportsmanship, and the importance of having fun in the process. They were also able to build connections to the players they looked up to by asking pertinent questions. This was a great experience for the scholars, one in which they learned more about a few Moral Focus virtues – perseverance, courage and selflessness.

“The team members were so good with the kids. They were gentle and kind. They had so much patience. They split the kids up into groups of three with two players per group of students and they each were doing different drills, like one group was dribbling, another group was practicing making baskets, running drills, and then they rotated,” Vanessa Robinson, student/family liaison said. Robinson worked with Ramdhanie in organizing the visit. 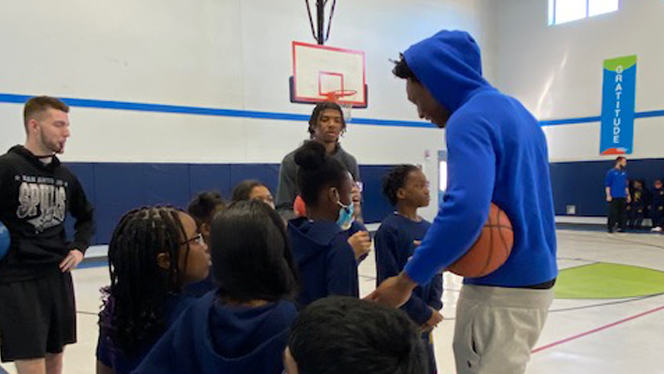 These students are getting some direction from this Hofstra basketball player.

Ramdhanie said, “There was a short Q&A session at the end and the scholars were able to ask the athletes questions. A couple of them asked if any of them ever met LeBron James. One student asked if they always wanted to be a basketball player. I vetted their questions, so they had some really good questions to ask.”

One of the players, Aaron Estrada, was honored the night of their visit at the team’s banquet as Player of the Year for Hofstra University. Estrada considered for a brief time leaving to enter the National Basketball Association’s (NBA) draft but decided to remain at Hofstra. 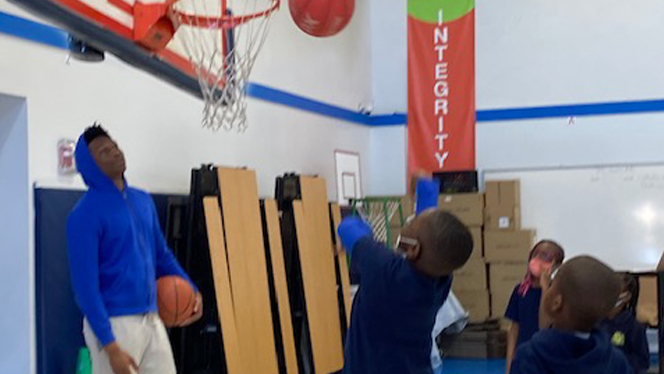 The Riverton third graders had a chance to see what happens during basketball practice.

The Riverton students and Hofstra basketball players scrimmaged together after doing their warm-up drills. Williams, who facilitated the visit, announced the scrimmages as if it was an actual basketball game.

“She called the plays during the scrimmage,” Ramdhanie said. “You would have thought you were at the Barclay Center at Hofstra University! The kids really played their hearts out. They loved it!” 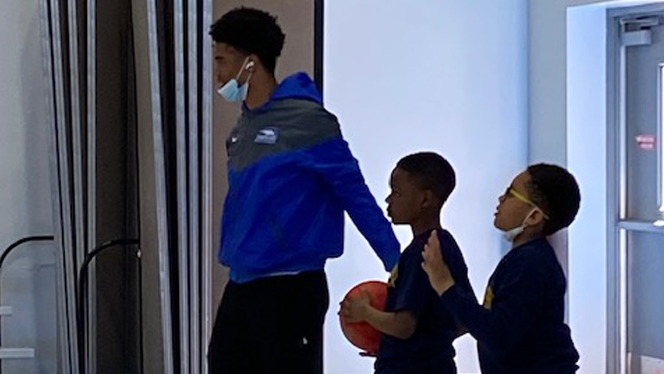 Students are lined up to do a drill.

At the end of the basketball team’s visit, the team and the scholars had a pizza party. The Hofstra Pride team brought the students backpacks filled with goodies. Then the students wrote thank you notes to the team who put the notes up in their locker room.

“It was inspirational. It showed our students that hard work does pay off,” Ramdhanie said. “It really gives the scholars a vision of college readiness. This idea is so important that we have it written on the back of the school uniforms – College-Bound: Aspire, Apply, Achieve. That’s why our classes are named after colleges and universities. That’s what we teach the students from the moment they get here in kindergarten.”