The 11-day competition took place July 28 through Aug. 8, and had more than 15,000 athletes participating in the 55th AAU Junior Olympics.

Richardson, his mother Andrea Bomar, and his sister Hunter, traveled to the event where Georgey ran the 3000-meter and the 1500-meter run in the competition. His dad, step-mom, and step-brother also attended the Junior Olympics to cheer for Georgey. “This was a boost to his confidence,” said Bomar. “My only expectation was to have Georgey finish and be a part of this amazing experience.”

Starting just three months ago with the MCTC, Georgey experienced several different races before focusing on the 3000- and 1500-meter runs. These are considered mid-distance runs. 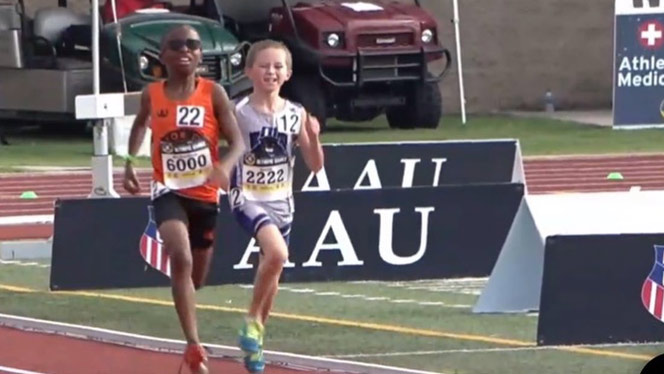 “He is always on the move and running and I decided track was a good way to channel that energy,” said Bomar. “From a parent perspective, this was such a big deal for me because Georgey has a 16-year-old sister who is special needs. She is non-verbal and not ambulatory. Georgey goes to every single one of her appointments for therapy. He never complains, and he even helps at them. This summer, we were able to flip the page and focus on Georgey. Going to the Junior Olympics, the three of us together was like a cherry on top of why I’m so excited. It didn’t matter how well he did, but that he finished, and it was a good experience.

This Instagram post of Georgey and another runner finishing the 3000-meter race shows some last second back and forth and each pushing the other to finish. His mom said at the end of that race the two of them grabbed some water, did a cool down, and causally walked around the track, like they were best buddies. “That’s what I’ll remember, the experiences created,” said Bomar.

“I’ll remember the crowd in the stands and the cheering,” said Richardson. “I’ll also remember the cockpit. It’s where you get ready for the race, do drills, and drink water”

“George is a great student and classmate. He is always so full of positive energy and loves to share what he knows with his peers. He is determined to learn new things and when things get tough, he perseveres and is never afraid to ask for a helping hand,” said Alicia Ward, George’s fourth grade teacher. “He is kind, caring, and always ready to make you laugh or smile. I am so proud of his accomplishments both in and out of school! I know that if he continues with this same tenacity, he will be able to achieve anything he puts his mind to in life.”

Kahlia Hart, incoming sixth grader at Grand River and MCTC member, has been dedicated to running since 2017. In her qualifying Region 12 meet, she placed first in the 100-meter dash, 80-meter hurdles, and 200-meter run.

“Kahlia likes the rush of the starting gun going off and competing to be first through the finish line,” said her mom, Andrea Hart. “She got the name ‘Showtime’ from one of her coaches due to her never showing her true talent until it's time to compete. At track practice Kahlia is known for only giving enough effort to not get called out by the coaches, but when it's game time she shows out.”

Hart received two silver medal wins in the girls 11-year-old category for the 80-meter hurdles and the 100-meter dash. Andrea Hart’s boyfriend, Santoi Rogers, is Hart’s MCTC coach and is one of her biggest supporters and guides.

“My experience was exciting and scary. I loved standing on the podium where I received my silver medals, and hearing my family and friends cheer for me was exciting,” said Hart. “The heat in Texas is different from Michigan. While running on the track my running shoes (spikes) that have metal points which help grip the turf actually melted. I was so happy at the finish line of my races because water was poured from a sponge to cool me off.”

Hally Yonko, physical education teacher and athletic director at Grand River shared that Kahlia is a quiet and caring student who is very determined to always do her best. “She gives her best every day in class and is kind and always willing to help her team,” said Yonko. “She is a role model to others and a pleasure to have in class. I am so proud of all Kahlia's hard work, dedication to her sport and accomplishments.” 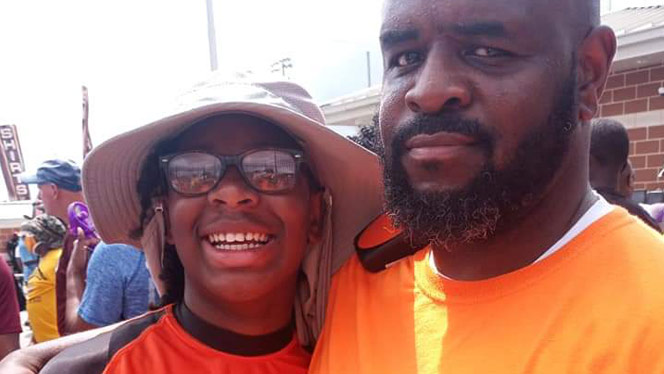 Kahlia’s mom recognizes her talent and plans to help her continue training so she can be her best in track and field.

Both families are convinced that now is the time to try different sports and experiences and see which ones the kids like to do. Sports teach sportsmanship and provide opportunities to meet people outside of school. It’s that coming-of-age stage. It’s an opportunity to learn to be a good citizen in society. These two student athletes are well on their way.
Share
Tags