A recent school day at Advantage Charter Academy became noteworthy as Principal Stephanie Jones realized all female administrators were scheduled to be away from the building. Jones would be away, as would Deans Keiara Skipper, Jessica Dominique, and Gia Johnson.

That left Middle School Dean Mendrek Solite all alone to lead the school; but Jones had an idea: Band-together a powerful team of men to take charge.

“We decided to give him some assistance with all men leading the building,” Jones said.

The six men dressed the part as well, clad in sport coats and suits, which made an impact on many.

“I thought it would be a great idea to spotlight the male leadership in our building,” Solite said. “Of course, we wanted to stand out. So, we decided to go all-in and dress the part. We knew the suits would get everybody's attention.”

The men started their day welcoming students outside during the driveline procedure and the reaction was immediate. 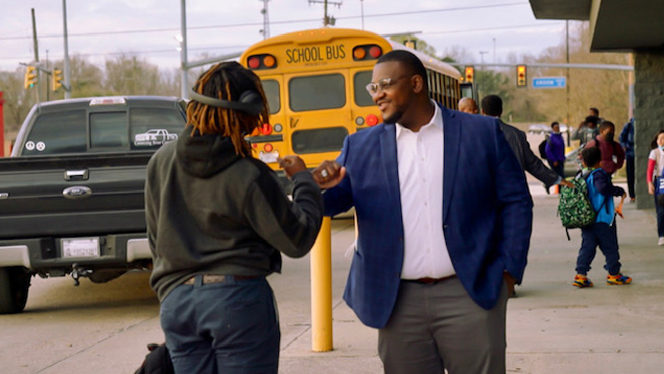 “We were the first group of people, all men, that they saw,” Solite said. “Our scholars and parents were amazed! We got smiles, waves, fist bumps, and several honks! A parent even emailed to share how impressed she was at what she observed while passing through carpool.”

The suits made a visual impact, but the group’s goal was much bigger than fashion.

“The goal was for our scholars to observe great examples of male leadership right inside of our building,” Solite said. “We wanted to communicate that our scholars do not have to rely on social media or the internet for guidance or mentorship.”

There’s already talk about applying this idea to one day a week for the 2022-23 school year and to call it “Men Who Lead.”

“We focus heavily on instruction, but we do understand the need to for building relationships, mentoring, and leading by example,” Solite said.

The men made an impact throughout the school that day. Principal Jones said she received emails and phone calls from parents and comments from teachers.

“They are great role models for our boys,” Jones said. “Just having men observing classrooms and walking the building set the tone across Advantage. It was reported back to me, there was not one behavior incident.”