Every year, the fifth graders at South Canton Scholars Charter Academy attend a four-day camp. This year, fifth graders were able to continue that tradition, and sixth graders were able to catch up on the tradition, after not being able to do it last year due to COVID. Both grades went a week apart in early May, arriving at camp before lunch on Tuesday and leaving after lunch on Friday.

The camp is located at Battle Creek Outdoor Education Center or Clear Lake Camp with 175 acres of property. It is based on the premise that exposing children to the out-of-doors in the school setting develops an initial awareness leading to a reasonable understanding of mankind’s ultimate dependence upon our natural environment. The school camping program thus becomes an extension of the classroom where teachers and their students use the out-of-doors as a laboratory in which to study, explore, and live in our natural environment. 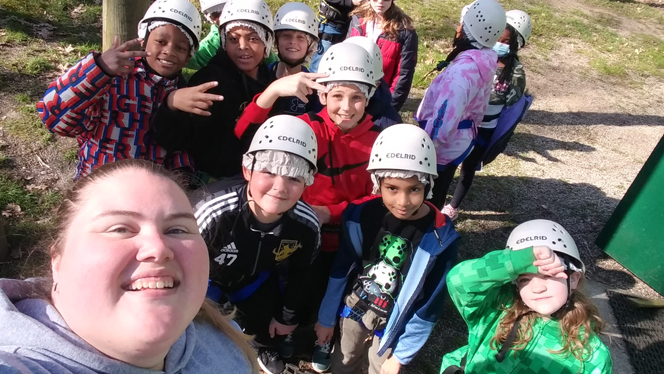 The experience also offers students the chance to develop skills and interests in outdoor recreation which will carry over into later life. This time of living together in a camp setting offers children the opportunity to live democratically with other children and adults as they study, work, and live together.

Fifth-grade Teacher KeriAnn Throne and Sixth-Grade Language Arts Teacher Cam Creighton led the camps for their grades along with other staff chaperones. Once at the Clear Lake Camp, their staff members managed all aspects of the camp experience.

“We do this to encourage team and relationship building, as well as to get the students out of their comfort zone,” Throne said. “Up to this point they have been in one class with one teacher all day, in fifth grade we introduce rotations, so they get used to the middle school model. Camp shows students that while new things can seem scary, they can build the relationships needed and work as a team to accomplish difficult tasks.

“They take this with them when they leave fifth grade and go into middle school. It is also another way to show that learning can be fun. Many students are not fans of learning new things, but when we got back from camp and talked about all they learned, they were surprised at how many things they could list!”

Throne and Creighton could choose the morning, afternoon, and evening activities their students did. The kids slept in a large cabin in bunk beds and went to a main cabin for meals.

The fifth and sixth-grade campers did a lot of similar items, but also chose a few different ones. There were team building activities like a high ropes course; science, technology, engineering, and math (STEM) lessons, teamwork and communications activities, and individually challenging activities like climbing a rock wall.

Fifth-Grade Camp
Forty fifth graders attended the camp and took part in activities like the high ropes course, rock wall climbing, archery, and an evening dance party. They also did a session where they learned about reptiles and saw snakes and a tortoise. The fifth graders experienced every kind of weather: rain, snow, sunshine, and wind. During the rock wall climbing, it was snowing. 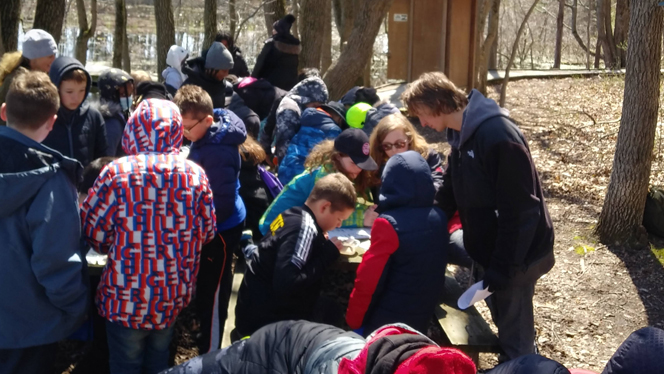 Students were able to do activities outside at the camp.

One activity that was unique to Throne’s group was building a remote operated vehicle with a camera. This was a team activity. The vehicle, with its waterproof camera, was driven into the lake and filmed underwater as it went.

“Because this was a team project, it was challenging for the kids,” Throne said. “We wanted the kids to build those social, emotional skills and they had to agree on a design for the vehicle. It was a challenge for sure, but lots of fun.”

Sixth-Grade Camp
Forty students attended the sixth-grade camp as well. They had warmer weather, but rain on the first and last day. They did activities like the high ropes course, archery, and an education session on mammals. The sixth graders also learned about other animals – an owl, an eagle, snakes, and a tortoise. 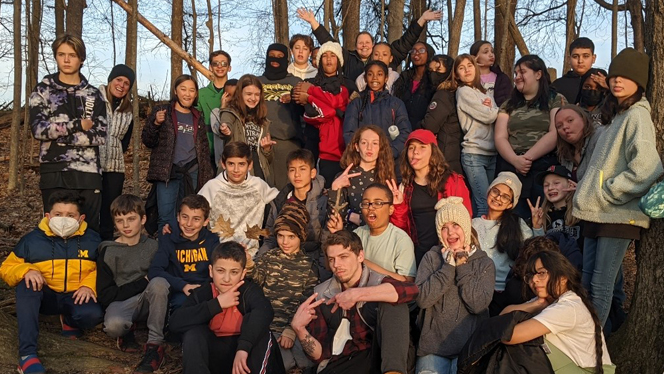 The sixth graders pose for a photo at Camp Clear Lake. They made sure not to miss out on a tradition due to COVID, they just waited a year to catch up.

The sixth graders participated in an activity about outdoor survival. The students were given a map of the property and the camp leader talked to them about directions. They hiked for about two miles learning about wayfinding as they went.

“One of the staff members taught the students how to build survival shelters by just using the materials in the forest,” Creighton said. “They put together structures that could be used to cover them from rain and learned how to make an all-natural mattress using pine needles and things like that. I learned a lot, but hopefully, I'm never in a situation where I need to apply those skills.”

The group also did a game show night. They played Jeopardy!, Wheel of Fortune and Liars Club which involved using a box of items from the 1800s.

These sixth-grade students learned how to make a shelter.

“The students had no idea what the items were,” Creighton said. “It was like two truths and a lie where out of our three staff, one told the truth and two lied about what the item was. The kids had to vote on who was telling the truth. It was pretty funny.”

A couple of activities both groups did were pretty unique. One had the students using fish nets to gather muck from the pond then the teams dissected the pile and looked for any living things they could find. Lots of macroinvertebrates and micro invertebrates were found. This included leeches, scuds, nematodes, backswimmers, and even water mites.

The students learned how to build a fire safely. They were taught how to strike a match and use a lighter. They learned the different materials needed in order to successfully make a fire. Eventually, later in the evening, the students built a bigger bonfire so everyone could apply those skills a bit and enjoy s’mores.

A game that both groups played was called predator versus prey. Student groups were assigned different color jerseys which corresponded to what type of animal they were: raccoons, coyotes, wolves, squirrels, deer, or hawks. 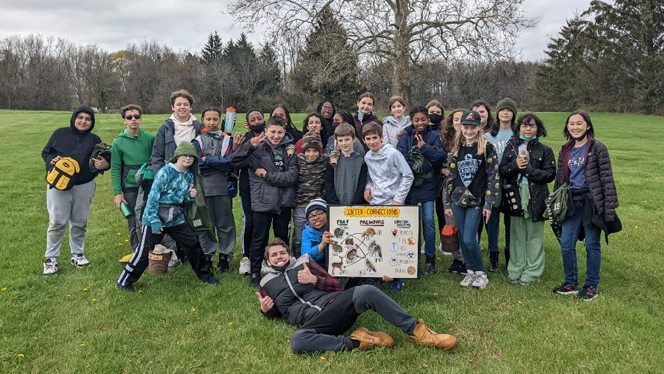 The sixth graders after their game called Inter-Connections or Prey versus Predators.

“So, it’s a game of tag essentially, except the kids could only hunt down or run away from certain animals that they could in real life,” Creighton said. “So, the idea was to teach them about what animals hunt other types of animals, what types are predators, and what are prey. They got a lot of exercise in doing that game. As the game went on, they added different elements like forest fires and hunters. It was really cool and a good learning experience.”

As the fifth graders headed home, Thorne’s favorite comment came when a student said, “‘Wait I have a phone and I didn’t need it for the past four days!’ They really did unplug, and it was great to see them realize they didn’t need technology in their hands 24/7 to have a good time. They started some real relationships that I see continuing now that they are back from camp.

“The growth that the kids experienced socially and emotionally in a new environment was great,” Thorne continued. “As an educator and as someone who’s watched them grow all year, it was just astonishing. I was so proud of them overcoming fears like being afraid of the dark or of heights, they were conquering fears left and right and growing so much. It was great!”