Kim Bondy has seen it all in her time at National Heritage Academies (NHA) – as a teacher and administrator, at various schools, and even under its former name. 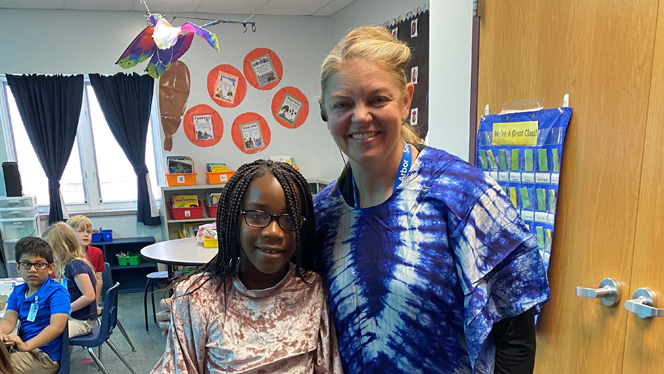 Kim Bondy wears a dress from a student after she took a trip to Africa.
Bondy has been with NHA for more than 25 years. She saw a flyer on a bulletin board for a fourth grade teacher position at Vanguard Charter Academy when it was opening in 1996 and NHA then was known as Educational Development Corporation. After 11 years as a principal at South Arbor Charter Academy, she now is a director of school quality (DSQ) and oversees Achieve Charter Academy, Canton Charter Academy, Canton Preparatory High School, Keystone Academy, Plymouth Scholars, South Canton Scholars, and Triumph Academy. 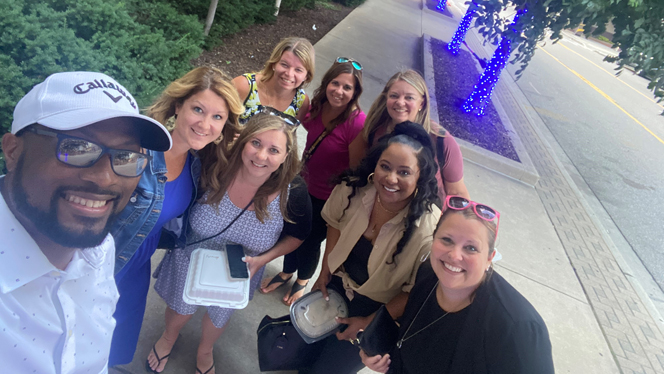 Kim Bondy and her principal team during Leadership Summit this summer in Grand Rapids.
Bondy never had the goal of becoming an administrator, but the opportunity to expand her reach from a single classroom to multiple schools was too appealing to pass up.

“I was doing the math the other day thinking, ‘Man, in a DSQ role there’s 4,500 to 5,000 kids that you’re serving every day. It’s just really mind blowing to think about it in that sense,” she said.

Kim Bondy gets in another round of hugs with kindergarten students at the end of the school year.
After a few years at Vanguard, Bondy served as a science specialist at several schools on the east side of Michigan and a middle school teacher at South Arbor before becoming an administrator. She earned her master’s degree in science as a way to further her education in the field, but she realized that she enjoyed helping connect teachers with resources, which led her to becoming a dean, principal, and eventually a DSQ.

In her time at South Arbor, which her three children all attended while she was there, Bondy helped the school celebrate its 20th anniversary in 2019 and was ranked second for best charter middle school in Michigan and third for charter elementary schools in the state by U.S. News & World Report in its 2022 rankings. Bondy also is proud of the work her team did during the COVID-19 pandemic, as teachers made sure they connected with scholars every day and adjusted to a new learning system. 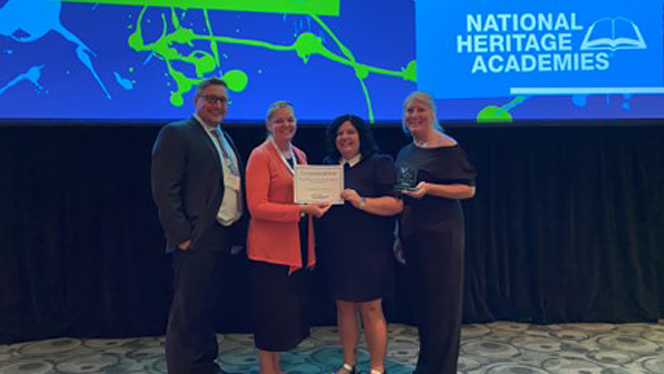 From left, current principal Fletcher Morgan, Kim Bondy, and deans Teri Scott and Megan Inman accept and Eagle Award for South Arbor.
“We supported our students and families in a way higher level than what our kids would have received if they would have been going someplace else,” she said. “I’m very proud of our team for everything that they did to reach out to connect and to make sure that learning was taking place every day during that time.”

In her first few months as a DSQ, Bondy has enjoyed seeing each school’s unique approach to transforming students’ lives. Each Friday she meets with her team to share the good things that are happening at each school.