Stephanie Glenn, principal at Pembroke Academy, wanted to educate students about an event in history that many are unaware of: Juneteenth. Juneteenth, short for “June Nineteenth”, honors the end to slavery in the United States and is considered the longest-running African American holiday. On June 17, 2021, it officially became a federal holiday.

She shared her vision with Mrs. Chelsea King, third-grade teacher at Pembroke, and asked for her assistance in bringing it to life. She wanted it to be an assignment that they would complete at home with their families to raise awareness. 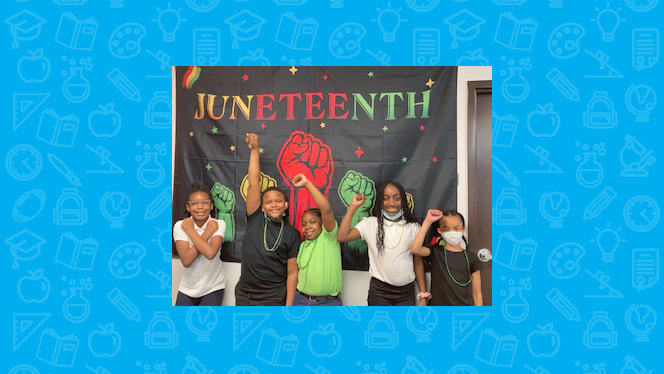 Scholars in third through seventh grade were tasked with a writing assignment. Their mission was to research and write about Juneteenth: “The Unofficial Holiday”. Specifically, they were asked to present their findings about what Juneteenth is, who it affected, when it occurred, where it happened, and why it is such an important event in history. Extra points were given to those who included how the name Juneteenth came to be. The assignment was optional, but students jumped quickly and rose to the occasion.

If students completed the assignment and turned it in by the due date, they not only gained knowledge on this important moment in history, but they were also invited to a Juneteenth celebration.

“I was excited to work with Ms. Glenn on this final project,” said King. “There was no hesitation on my part. I’ve always stressed to my students that Black History is American History and that no one should know more about their Black History than them. There were so many monumental moments in Black History that I wasn’t taught in school. Ms. Glenn and I both believe that educating our scholars the way that we weren’t is so important especially when we are on the brink of long-awaited change within our country.” 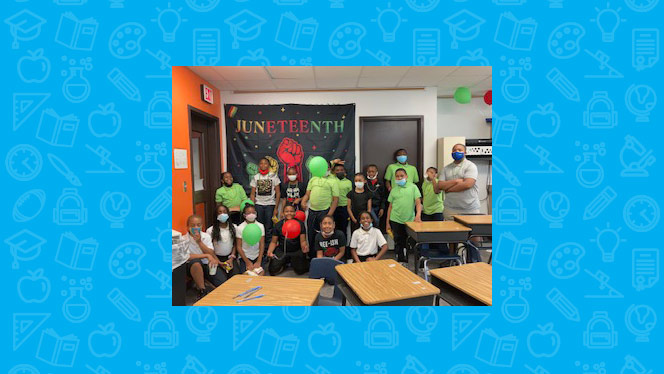 For the scholars that turned in the assignment, they were given special tickets and invited to the celebration. Glenn spoke to scholars about the reason why they were all gathered, and the party began. There was line dancing, food, a signature beverage, music, games, and more. Scholars had a wonderful time celebrating their freedom.

“This wasn’t just a one-time event,” said Glenn. “We plan on bringing this project and celebration back every year and making it bigger and better as we raise awareness about OUR freedom.”