Did you know that each night in the United States an estimated 600,000 people are homeless? Greensboro Academy first-grade students sprang into action during the month of October and participated in “Socktober” to help their local community.

During the month of October, Socktober aimed for “2 million people to show that even a small act of love, such as donating a pair of socks, can make a big difference in the lives of our neighbors who are homeless.”

In total, Greensboro students collected over 200 pairs of socks and donated them to a local Greensboro shelter! 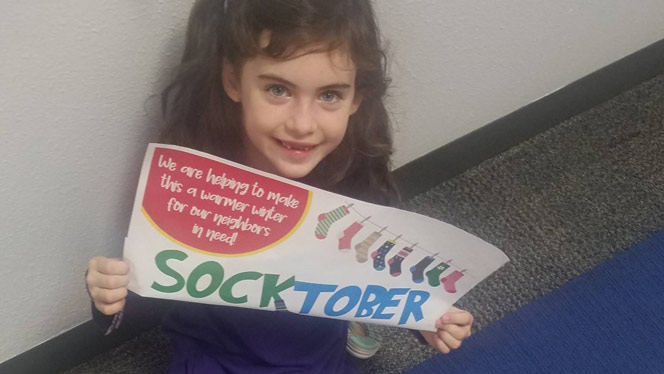 Giving back to their local community is important at Greensboro Academy. This fundraiser aligns closely with the school’s emphasis on Moral Focus. Every month a different Moral Focus virtue is featured throughout the school because they care about developing the whole student, heart and character included. With November’s Moral Focus virtue being gratitude, students were able to appreciate the kindness and generosity of others and extend that to their community.

Using these virtues supports making the school a safe, caring place to learn and grow. Outside the classroom, it reinforces the strong moral values that help children interact with their friends, families, and communities with respect and care.

Socktober was created in October 2011 by Brad Montague who realized there was a large homeless population in his hometown, and he wanted to do something about it. While researching the needs of the homeless community, he learned that socks are the items least donated to homeless shelters. Kids and adults around the world now host their own sock drives to benefit their local homeless shelters.