The mental and physical connection that occurs when creating art can be difficult to describe, but Cross Creek Charter Academy eighth grader Van Bik has a firm yet awe-inducing grip on his process.

“When I look at a blank piece of paper, I don’t really have any inspiration about what to make,” Van said. “But when I think of things I’ve seen before, I imagine how they would look in my brain, then I almost like, print it out through my hand onto the paper.” 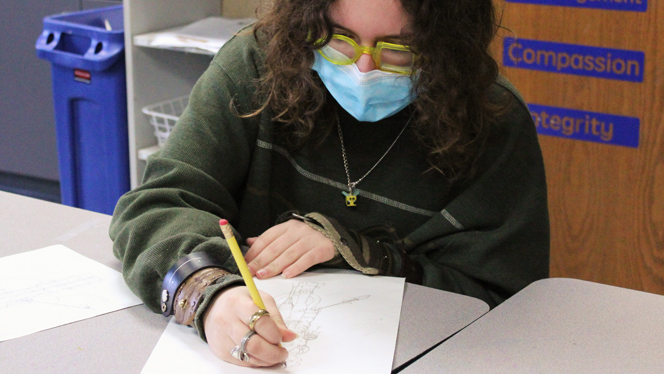 When that happens, Van’s markers streak across the paper, creating fine details and accents to draw attention to his characters.

Van, 13, and classmate Audrey Wieringa, 14, were both awarded Gold Key Awards by Kendall College of Art and Design. Wieringa comes from a talented art family; her father is a professional artist, and her mother, Nicole, is the art teacher at Cross Creek. Audrey was featured earlier this year as a runner-up in Michigan Gov. Gretchen Whitmer’s State of the State Art Contest. 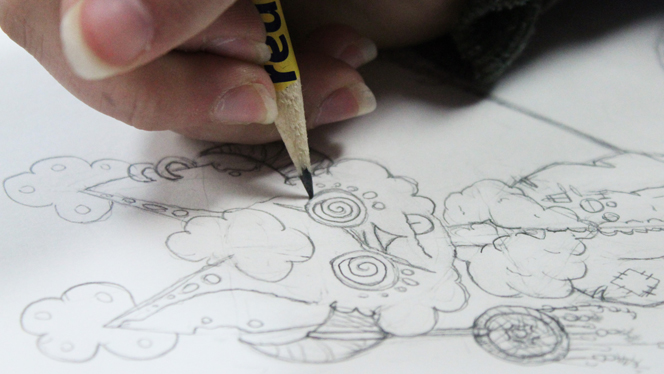 Creative ideas come to her quickly, so she always has a piece of paper and pencil with her, just in case she needs to sketch something out.

“I think it’s part of being an artist, just working on yourself,” Audrey said. “You’re never going to be perfect; you’re always going to find new and different things you want to add. I like to look at other people’s styles, especially Van’s, and think about what I can do better for my style, or what I can change.” 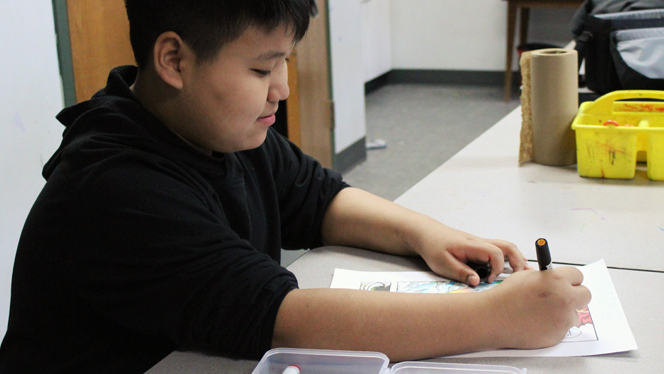 Van dabbled in a couple different artistic styles before focusing on manga, a Japanese art style of comics or cartoons with roots in the late 19th century. It’s become extremely popular with teens and graphic novel enthusiasts.

“When I started drawing it was all cartoon-based, then I tried realistic drawing and figured out that wouldn’t work for me, so then I found manga art style and I really liked that,” he said. 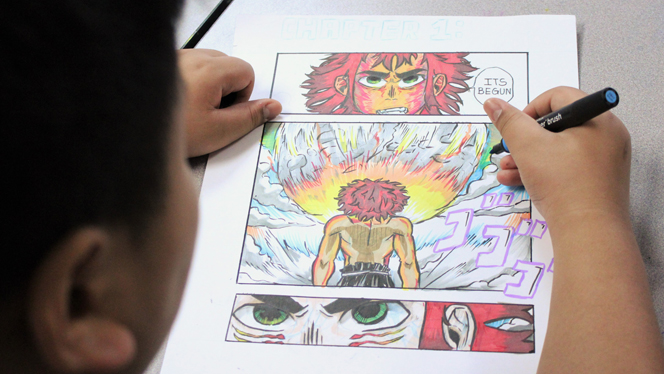 Van’s classmates have taken an interest in his work as well and started commissioning his talents. The problem, according to Nicole, is he doesn’t charge them enough.

“Some kid asked him to customize his Nike shoes and Van was going to charge him $10 and even the kid was like ‘No way! That’s not enough!’” Nicole said with a laugh. “He’s always giving drawings away to his friends.”

The biggest challenge for Van and Audrey is focusing on the schoolwork in front of them, not necessarily the drawings they’re working on, Nicole said.

“Both are drawing in class a little too much. I have teachers telling me that, but that’s their talent. Their minds are thinking differently than a typical student. They’re very strong in their careers and will be very successful.”

Nicole has been teaching at Cross Creek since 2016 and has been impressed with the support she’s received from school leaders.

“Walking around the hallways I see teachers tying in an art project with their lessons and I think that’s really important,” she said. “Joe (Principal Joe Nieuwkoop) has been really supportive of the art program here. It’s not just a babysitting class, it’s an important part, because there are kids like Van and Audrey who need that outlet to get their creativity out.

“I feel like NHA has put the fine arts as an importance and it’s great that they don’t feel the pressure to back off like some other schools. It should go all together.”